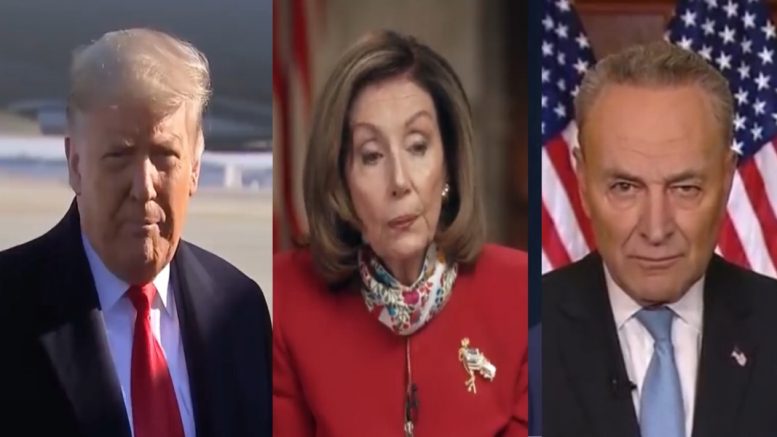 The Commander in Chief on Tuesday, spoke briefly with reporters before heading to the U.S.-Mexico border near Alamo, Texas, to mark the completion of more than 400 miles of border wall.

While giving remarks, the president weighed in on Democrats’ latest effort to impeach him following the chaos that emerged at the Capitol last week, calling it a “continuation of the greatest witch hunt in the history of politics”.

The Commander in Chief also commented on social media corporations after Twitter and Facebook suspended the president from posting on their platforms following last week’s events that unfolded at the U.S. Capitol in Washington, D.C.

“I think that big tech is doing a horrible thing for our country and to our country, and I believe it’s going to be a catastrophic disgrace for them. They’re dividing and divisive and they’re showing something that I’ve been predicting for a long time. … People didn’t act on it. I think big tech has made a terrible mistake and very, very bad for our country, and that’s leading others to do the same thing,” he said. Continued Below

The president said what social media is doing is “causing a lot of problems and danger”, adding, “Big mistake, they shouldn’t be doing it. But there’s always a counter move when they do that. I’ve never seen such anger as I see right now, and that’s a terrible thing.”

He also noted, “We have to always avoid violence and we have tremendous support. We have support probably like nobodies ever seen before, always have to avoid violence.”

Asked what is his role and personal responsibility in what happened at the Capitol, the president replied, “If you read my speech, and many people have done it, and I’ve seen in both in the papers and the media– on television, it’s been analyzed and people thought what I said was totally appropriate. And if you look at what other people have said, politicians at a high level, about the riots during summer– the horrible riots in Portland and Seattle and various other places, that was a real problem what they said.” Video Below

“But they’ve analyzed my speech and my words and my final paragraph, my final sentence, and everybody to the ‘T’ thought it was totally appropriate,” President Trump added.

Matthew Dowd Suggests Rep Gaetz Is Inferior To A “Tool”, Gaetz Fires Back: “Your Views Are The Definition Of Useless”