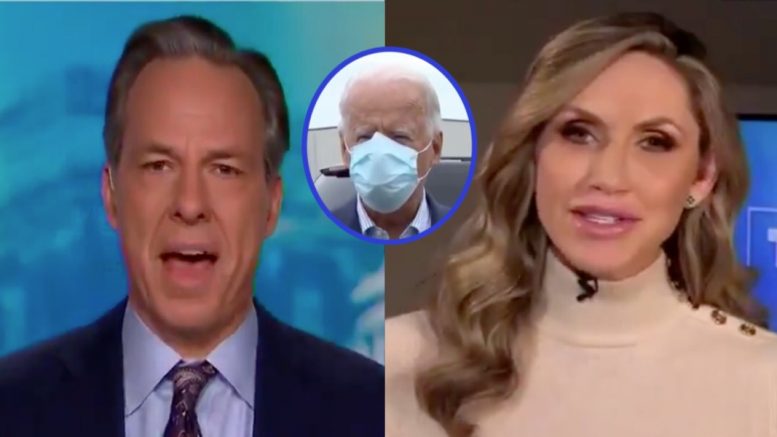 Sunday during CNN’s airing of “State of the Union”, host Jake Tapper had a meltdown after Lara Trump suggested that Democratic presidential nominee Joe Biden has cognitive decline, saying that she does “not have any standing”.

Tapper played a clip of previous comments Lara Trump had made where she critiqued Joe Biden speaking in public appearances, telling Trump that Biden “has worked to overcome a stutter”.

“I want to ask you a couple things about things you’ve done on the campaign trail. Joe Biden, as we all know, has worked to overcome a stutter,” Tapper said. “How do you think it makes little kids with stutters feel when they see you make a comment like that?”

Lara Trump responded, “First and foremost, I had no idea that Joe Biden ever suffered from a stutter. I think what we see onstage with Joe Biden, Jake, is very clearly a cognitive decline. That’s what I’m referring to. It makes me uncomfortable to watch somebody on stage search for questions and try to figure out an answer.

Lara responded: “Well, when you are trying to tell me what I was suggesting was a stuttering– I had no idea. Of course I wasn’t, Jake. Wow. I’m not diagnosing. You would think Joe Biden today is not the Joe Biden of 5 years ago, of 10 years ago. I’m not diagnosing him. … We can clearly see Joe Biden is struggling at times onstage and concerning to a lot of people that this could be the leader of the free world. That is all I’m saying. I genuinely feel sorry for Joe Biden. Video Below

"I think what we see on Joe Biden on stage is very clearly a cognitive decline."pic.twitter.com/9rkyQ1MNTx

Also during Sunday’s interview, Jake Tapper claimed that Joe Biden did not call President Trump’s travel ban “xenophobic” when the Commander in Chief suspended entry from China in January during at the onset of the coronavirus.

On January 31, 2020, the Commander in Chief issued an Executive Order to “restrict and suspend the entry into the United States, as immigrants or nonimmigrants, of all aliens who were physically present within the People’s Republic of China, excluding the Special Administrative Regions of Hong Kong and Macau”.

Democratic presidential nominee Joe Biden quickly attacked what he called Trump’s “record of hysteria, xenophobia and fear-mongering” after the travel restrictions were announced, and argued that President Trump “is the worst possible person to lead our country through a global health emergency.” Video Below

Lara Trump: "Thank goodness we didn't have Joe Biden in the White House because he called [the travel ban] xenophobic…"

LT: "Absolutely he did."

Q: "No he didn't — he referred to the president's long history of xenophbia and racism." pic.twitter.com/S9ZGtk2UX8

We are in the midst of a crisis with the coronavirus. We need to lead the way with science — not Donald Trump’s record of hysteria, xenophobia, and fear-mongering. He is the worst possible person to lead our country through a global health emergency.

(Related: Lara Trump Rips Biden’s ‘I Don’t Remember’ Claim On Tara Reade: “He Doesn’t Remember Where He Is Half The Time”)