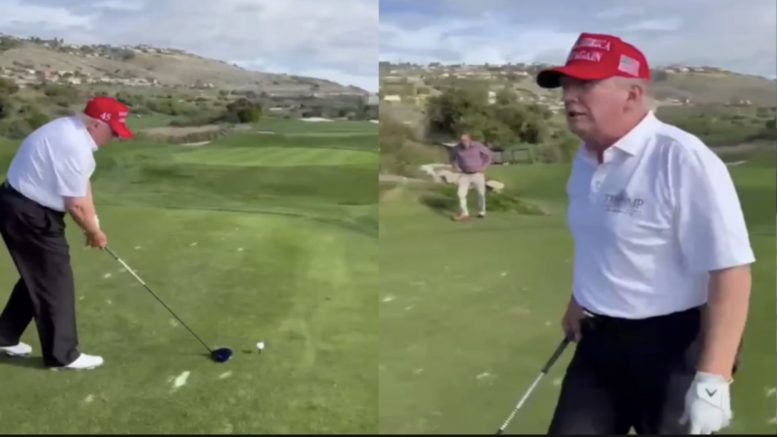 In a video seen on social media that is now going viral, former President Donald Trump is seen enjoying a game of golf, while setting up his tee at Trump National Golf Course.

A man filming Trump, can be heard in the video saying, “45th President of the United States”, which prompted an immediate response from the former Commander in Chief.

President Trump responded to the man filming the video, correcting his statement. “45th and 47th,” he confidently said.

The 45th President’s remarks come amid Joe Biden’s historically low approval numbers, which have dipped into the 30’s.

The ongoing slump in Biden’s popularity is ringing alarm bells in his party, with Democrats worried dissatisfaction could cost them their congressional majorities in Nov. 8 elections. If Republicans take control of either the U.S. House of Representatives or Senate, Biden’s legislative agenda could be doomed, Reuters reported.

Trump has not formally announced whether or not he will run for president in 2024, but indicated he will “probably” wait until after November’s midterm elections to formally announce if he does.

He told Fox News last year in November, “I think a lot of people will be very happy, frankly, with the decision, and probably will announce that after the midterms.”

Trump has also told Sean Hannity last August, in an interview, “As the campaign finance laws are extremely complicated and unbelievably stupid, I’m actually not allowed to answer that question, can you believe it? I’d love to answer [if I’m running again]. But let me put it this way, I think you’ll be happy and I think a lot of our friends will be very happy. But I’m not actually allowed answer it, it makes things very difficult if I do. I love this country and I hate to see what’s happening to it”.