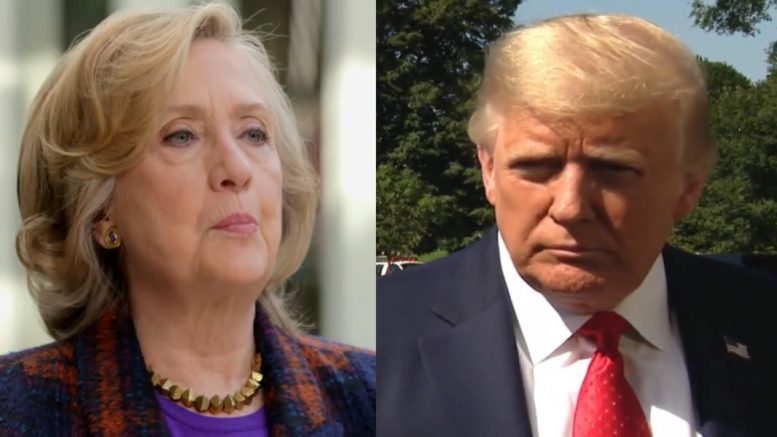 A February 11 filing from Special Counsel John Durham states that lawyers for the Clinton campaign paid a technology company to “infiltrate” servers belonging to Trump Tower, and later the White House, in order to establish an “inference” and “narrative” to bring to government agencies linking Donald Trump to Russia.

45th President Donald Trump reacted in an email statement on Saturday from his “Save America” PAC, saying the latest filing “provides indisputable evidence that my campaign and presidency were spied on by operatives paid by the Hillary Clinton Campaign”, adding, “those who were involved in and knew about this spying operation should be subject to criminal prosecution”.

“The latest pleading from Special Counsel Robert Durham provides indisputable evidence that my campaign and presidency were spied on by operatives paid by the Hillary Clinton Campaign in an effort to develop a completely fabricated connection to Russia,” the 45th President said in a statement following Special Counsel John Durham’s filed motion.

“This is a scandal far greater in scope and magnitude than Watergate and those who were involved in and knew about this spying operation should be subject to criminal prosecution. In a stronger period of time in our country, this crime would have been punishable by death,” President Trump said, likely referring to the punishment of treason.

“In addition, reparations should be paid to those in our country who have been damaged by this,” he recommended.

Special Counsel John Durham filed the government’s motion to inquire into potential conflicts of interest in the Michael Sussmann case. Sussmann was charged with giving false statements to then-FBI General Counsel James Baker regarding the interests he was representing in pushing to the FBI the Alfa Bank/Trump Organization hoax, as reported by Swamp Drain. Continued Below

Techno Fog reported: Joffe and his associates manipulated this information to further a conspiracy theory that Trump and those in Trump’s orbit were continuing their secret backchannels with the Russians. This was repackaged with the Alfa Bank hoax and given to Sussmann, who then laundered it to the CIA on February 9, 2017. Sussmann alleged to the CIA that the data showed “that Trump and/or his associates were using supposedly rare, Russian-made wireless phones in the vicinity of the White House and other locations.” Durham “identified no support for these allegations”. Continued Below

Read the 13 page filing: GOVERNMENT’S MOTION TO INQUIRE INTO POTENTIAL CONFLICTS OF INTEREST.

Former chief investigator of the Trump-Russia probe for the House Intelligence Committee under then-Rep. Devin Nunes (R-CA), Kash Patel, also issued a statement on Saturday, saying, the filing “definitively shows that the Hillary Clinton campaign directly funded and ordered its lawyers at Perkins Coie to orchestrate a criminal enterprise to fabricate a connection between President Trump and Russia.”

New statement from our Senior Fellow #KashPatel on the latest Durham filing. pic.twitter.com/9eLRzUKtQP

Sussmann’s indictment is the second prosecution to come out of Durham’s probe. In 2020, Durham charged former FBI lawyer Kevin Clinesmith with making a false statement – the first criminal case arising from his probe.

Former Attorney General Bill Barr appointed Durham, then the U.S. attorney from Connecticut, in 2019 to investigate the origins of the FBI’s original Russia probe, or Crossfire Hurricane, which began in July 2016, through the appointment of Special Counsel Robert Mueller in May 2017 shortly after Mueller completed his years-long investigation into whether Trump’s campaign colluded or coordinated with the Russians to influence the 2016 presidential election, Fox News reported.

"The latest pleading from Special Counsel Robert Durham provides indisputable evidence that my campaign and presidency were spied on by operatives paid by the Hillary Clinton Campaign in an effort to develop a completely fabricated connection… pic.twitter.com/jaERtmhDER

“I think it’s the political crime of the century, and they’ve been caught, let’s see what happens to them all.”

During a ’60 Minutes’ interview in Oct. 2020, Trump reiterated that his campaign was spied on, but  Lesley Stahl was not having it.