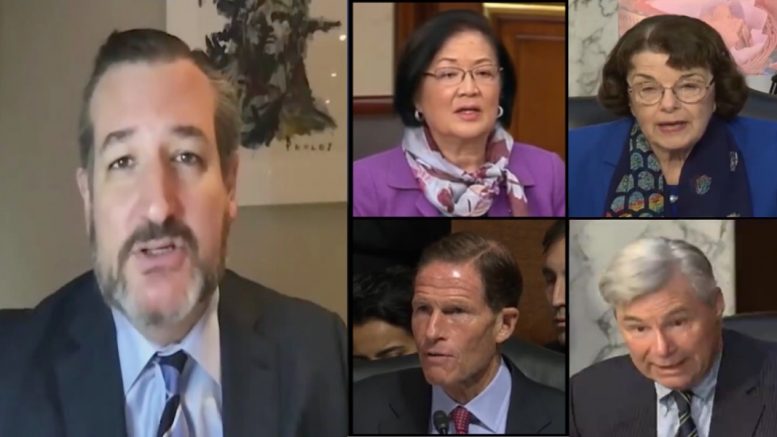 Barrett, 48, was nominated on September 26 by President Donald Trump and if confirmed by the Senate, she would fill the seat vacated by the late Justice Ruth Bader Ginsburg. She would be the sixth justice on the nine-member court to be appointed by a Republican president, and the third of President Trump’s first term in office.

“I want to start by making some observations about what we heard this morning,” Senator Ted Cruz said in his opening remarks. “At the very beginning, let me observe as Sherlock Holmes famously observe that what speaks the loudest, is the dog that didn’t bark, which is to date, every Democrat who spoken, we’ve heard virtually not a single word about about Judge Barrett.”

“We’ve heard a lot of attacks at President Trump, we understand that our Democratic colleagues are not supporters of the president. We’ve heard a lot of political rhetoric. We just heard the Senator from Rhode Island [Shelton Whitehouse] directing attacks at Senator Cornyn from Texas, and I understand there’s an election in a few weeks, so those political attacks are not surprising,” Cruz continued.

“But we’ve heard very little about the nominee, who is here and whose confirmation we are considering,” the Texas Senator pointed out. “And I think part of the reason for that is that on any measure, Judge Barrett’s credentials are impeccable.”

Senator Cruz explained that Judge Barrett graduated “number one in her class at Notre Dame Law School”, adding, “I’d venture say that there is likely not a single member of this committee who graduated number one in their class in law school. … It is a very impressive accomplishment.” Continued Below

“Judge Barrett went on to be a clerk to the great Justice Antonin Scalia, one of the greatest justices to ever serve on the Supreme Court,” Senator Cruz expressed. “We heard celebration from Senator Leahy about the fact that he was confirmed 98-0.”

“And now, she is one of the most federal court of appeals judges in the country,” he said. “None of the discussions from our Democratic colleagues addressed any of that, because those impeccable– those credentials are on their face impeccable indeed.” Video Below

Senator Ted Cruz also pointed out that the “American Barr Association, which typically leans hard left and has a long pattern of favoring Democratic nominees over nominees appointed by Republican presidents, had no choice but conclude she was well qualified as a reviewing majority of the board did”.

“Judge Barrett’s qualifications are remarkable and I believe she will serve as an excellent Supreme Court Justice,” he added.

[email protected] Democrats have said very little about Judge Barrett’s impeccable credentials. Instead, they have spent their time lobbing attacks against @realDonaldTrump.

Judge Barrett’s qualifications are remarkable & I believe she will make an excellent #SCOTUS Justice. pic.twitter.com/vQfGMVOL8K

(Related: Sen. Hawley Calls Out Dems For Trying To ‘Bring Back The Days Of The Religious Test’: “It Must Stop”)

Sen. Cruz Explains With a Graph How Biden’s Policies Have Resulted in ‘an Assault on American Energy’