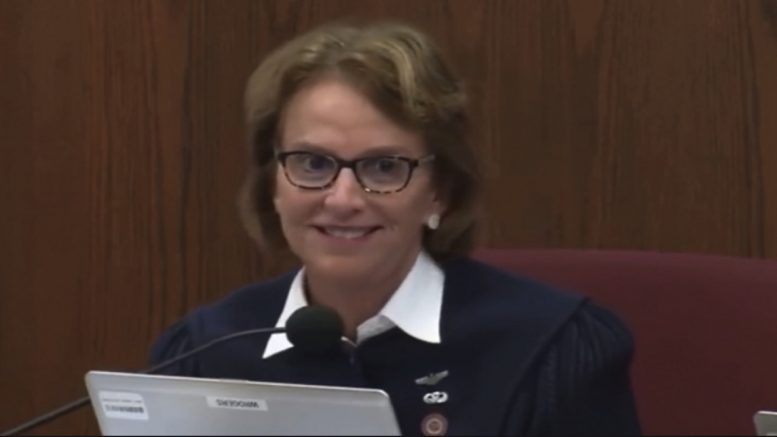 Arizona State Senator Wendy Rogers (R-6) announced in a press release on Tuesday that she is introducing legislation to abolish automated voting machines — in an effort to restore election integrity and to make sure all legal votes in Arizona are counted for.

“I was elected to propose bills. That is my MAIN job,” Senator Rogers said on Twitter Monday.

SB 1348 would prohibit the use of electronic or other tabulating equipment and would require all ballots to be counted by hand for any and every state, county, city or town election.

Furthermore, neither the Secretary of State, the Board of Supervisors, nor any other officer in charge of elections shall allow the use of electronic or other tabulating equipment.

Ballots would be counted by hand only and required to remain segregated by precinct, both before and after counting. Continued Below

In a statement, Senator Rogers said, “An alarming number of voting machines are vulnerable to hackers. These systems aren’t reliable and don’t have any credibility.”

“We need to make bold moves to guarantee that every vote is accurately counted. We owe this to the people of Arizona. Even just a dozen votes can make or break a race,” she said.

“In order to improve the security of the ballot and election integrity, we need to move from machines to human hand counts,” the Arizona lawmaker recommended. Continued Below

To quote American columnist and author William Vaughan, “To err is human, to really foul things up requires a computer.” SB 1348 returns to an election system that every American can understand: hand counting. With complicated voting systems comes complicated vulnerabilities that can be difficult to detect. Arizonans deserve a voting system they can both understand AND trust. SB 1348 returns us to this, the press release states.

Upon a search on azleg.gov., Sen. Wendy Rogers has pre-filed 88 bills and co-sponsored 17 bills amid the Arizona State legislature reconvening.

On Monday, Sen. Rogers posted a screenshot spotlighting 75 of her proposed bills:

On Wednesday, she declared, “We are restoring the integrity of our elections”.

There are nearly 70 election bills proposed in the Arizona Senate. @AZKellyT is doing a great job handling them as govt chair. The AZ Senate is so busy, going to be a lot of late nights. But it is worth it. We are restoring the integrity of our elections.

We are going back to in person one day one vote no machines and paper ballots with watermarks because of crooks like YOU and Hobbs. https://t.co/8i3gN6YAkU

‘I’m the Only One in This Race That Says [Trump] Won the 2020 Election’: NC GOP Candidate Sandy Smith Issues a Message Ahead of Tuesday’s Primary