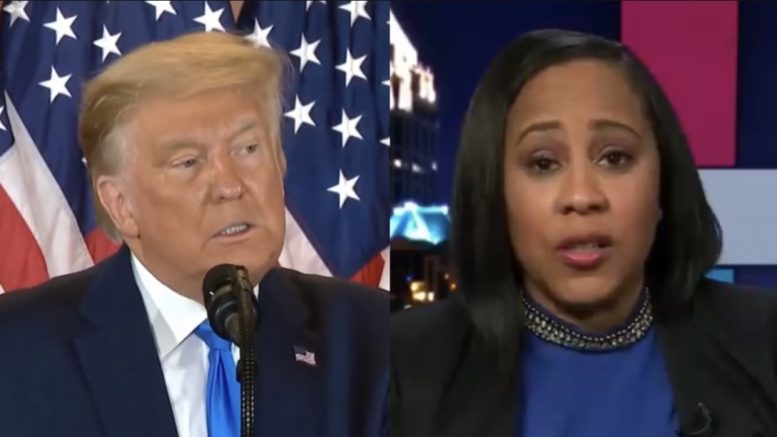 45th President Donald J. Trump issued an email statement from his “Save America” PAC on Friday, commenting again over Georgia’s ongoing 2020 election investigation following a report that the Fulton County district attorney’s office requested that a special grand jury help in her investigation of Trump and his alleged attempt to interfere with the outcome of the 2020 presidential election in Georgia.

Fulton County District Attorney Fani Willis’ probe, launched in February 2021, is centered on the January 2nd phone call 45th President Donald Trump placed to Brad Raffensperger, in which he reportedly urged the Republican to “find” the votes to reverse Joe Biden’s win in Georgia in November 2020.

Fani Willis made her request in a Thursday letter to Christopher Brasher, chief judge of the Fulton County Superior Court.

In the letter, she said: “Please be advised that the District Attorney’s Office has received information indicating a reasonable probability that the state of Georgia’s administration of elections in 2020, including the state’s election of the president of the United States, was subject to possible criminal disruption.”

Willis has declined to speak about the specifics of her investigation, but in an interview with The Associated Press earlier this month she confirmed that its scope includes — but is not limited to — a Jan. 2, 2021, phone call between Trump and Georgia Secretary of State Brad Raffensperger, a November 2020 phone call between U.S. Sen. Lindsey Graham and Raffensperger, the abrupt resignation of the U.S. attorney in Atlanta on Jan. 4, 2021, and comments made during December 2020 Georgia legislative committee hearings on the election, Politico reported.

In a statement on Thursday, 45th President Donald Trump said his call to Brad Raffensperger was “perfect”, and called for “no more political witch hunts”, as previously reported by The Freedom Times. Continued Below

On Friday, Trump commented again in a statement over the investigation, saying, “This is not the American way.”

“So let me get this straight, I am being investigated in Georgia for asking an Attorney General with many lawyers and others knowingly on the phone to look for corruption, which definitely took place in the Georgia Presidential election—but the people who committed the crime are in no way, shape, or form under investigation and are instead being protected?” he asked.

In March of last year, far-left Washington Post who had initially covered the alleged story, retracted their claims in regards to the phone call with then-President Trump and Frances Watson, chief investigator with the Georgia Secretary of State’s office, as previously reported by The Freedom Times.

“Instead, Trump urged the investigator to scrutinize ballots in Fulton County, Georgia, asserting she would find “dishonesty” there,” reads the retraction from Washington Post, with the former president, adding that she had “the most important job in the country right now.”

Most recently, Georgia authorities launched an investigation into an allegation of systematic ballot harvesting during the state’s 2020 general election and subsequent U.S. Senate runoff and may soon issue subpoenas to secure evidence, according to a report from John Solomon at Just The News.

"So let me get this straight, I am being investigated in Georgia for asking an Attorney General with many lawyers and others knowingly on the phone to look for corruption, which definitely took place in the Georgia Presidential election— pic.twitter.com/lkOkZUah74