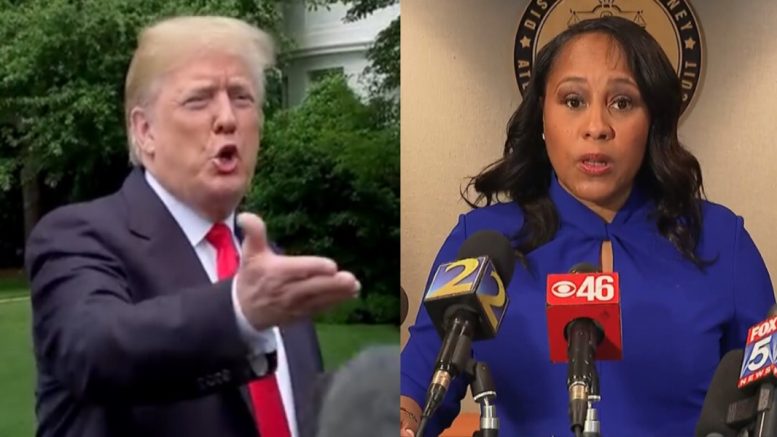 45th President Donald J. Trump issued an email statement on Thursday afternoon from his “Save America” PAC insisting that he “didn’t say anything wrong” during a phone call with Georgia’s secretary of state concerning possible voter fraud.

Trump’s statement came after Fulton County District Attorney Fani Willis on Thursday, requested that a special grand jury help in her investigation of Trump and his alleged attempt to interfere with the outcome of the 2020 presidential election in Georgia.

Willis’ probe, launched in February 2021, is centered on the January 2nd phone call 45th President Donald Trump placed to Brad Raffensperger, in which he reportedly urged the Republican to “find” the votes to reverse Joe Biden’s win in Georgia in November 2020.

However, in March of last year, far-left Washington Post who had initially covered the alleged story, retracted their claims in regards to the phone call with then-President Trump and Frances Watson, chief investigator with the Georgia Secretary of State’s office, as previously reported by The Freedom Times.

“Instead, Trump urged the investigator to scrutinize ballots in Fulton County, Georgia, asserting she would find “dishonesty” there,” reads the retraction from Washington Post, with the former president, adding that she had “the most important job in the country right now.” Continued Below

My phone call to the Secretary of State of Georgia was perfect, perhaps even more so than my call with the Ukrainian President, if that’s possible. I knew there were large numbers of people on the line, including numerous lawyers for both sides. Although I assumed the call may have been inappropriately, and perhaps illegally, recorded, I was not informed of that.

I didn’t say anything wrong in the call, made while I was President on behalf of the United States of America, to look into the massive voter fraud which took place in Georgia. Just last week, it was further determined that they are looking into ballot harvesting in Fulton County, after supposedly watching tapes of it actually taking place.

This alone could be tens of thousands of votes. What this Civil Special Grand Jury should be looking into is not my perfect phone call, but the large scale voter fraud that took place in Georgia. Then they would be doing a great job for the people. No more political witch hunts! Continued Below

Trump was referencing a report from John Solomon at Just The News, revealing that Georgia authorities have launched an investigation into an allegation of systematic ballot harvesting during the state’s 2020 general election and subsequent U.S. Senate runoff and may soon issue subpoenas to secure evidence.

"My phone call to the Secretary of State of Georgia was perfect, perhaps even more so than my call with the Ukrainian President, if that’s possible.  I knew there were large numbers of people on the line, including numerous lawyers for both… pic.twitter.com/TCMZnzkX5L