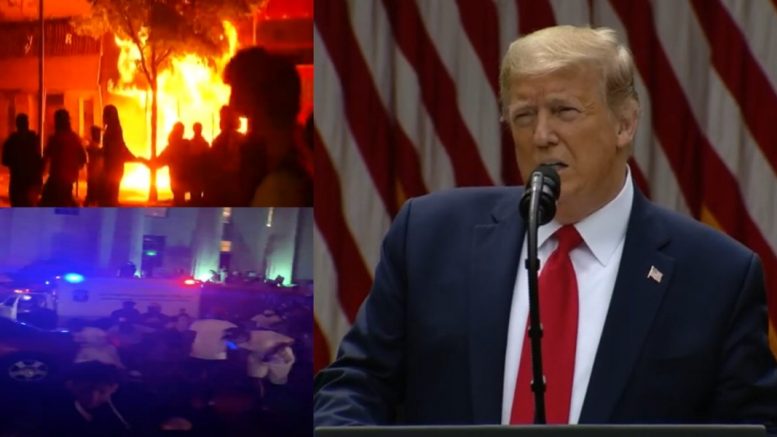 Seven people were shot Thursday in downtown Louisville, Ky., as several hundred protesters gathered to protest the death of Breonna Taylor, who was shot and killed in her own apartment by police in March, The Hill reported.

Video surfaced on social media Thursday night when shots could be heard and protesters running and screaming in Lousville.

Following the rioting and looting in Minnesota and protesting in other cities after the death of George Floyd, President Trump took to Twitter Thursday saying there is a “total lack of leadership”.

“I can’t stand back & watch this happen to a great American City, Minneapolis. A total lack of leadership. Either the very weak Radical Left Mayor, Jacob Frey, get his act together and bring the City under control, or I will send in the National Guard & get the job done right,” he wrote.

“These THUGS are dishonoring the memory of George Floyd, and I won’t let that happen. Just spoke to Governor Tim Walz and told him that the Military is with him all the way. Any difficulty and we will assume control but, when the looting starts, the shooting starts. Thank you!” the president added.

Twitter, however, took the remarkable step of hiding the President’s second tweet, covering it with a public notice appearing on the platform alleging it had “violated the Twitter Rules about glorifying violence.” The tweet was not deleted outright, however, with the tech giant adding that it had “determined that it may be in the public’s interest for the Tweet to remain accessible” to users electing to click a “View” button, Breitbart reported. Continued Below

“Looting leads to shooting, and that’s why a man was shot and killed in Minneapolis on Wednesday night – or look at what just happened in Louisville with 7 people shot. I don’t want this to happen, and that’s what the expression put out last night means,” Trump wrote.

“It was spoken as a fact, not as a statement. It’s very simple, nobody should have any problem with this other than the haters, and those looking to cause trouble on social media. Honor the memory of George Floyd!” he expressed. Video Below

Here is some of the video footage from Thursday in Louisville:

Two men shot in the street in Louisville. Reporter on the scene says there were no cops around until they rushed to them with medical assistance. pic.twitter.com/19WCtiRNI5

Breaking: Reports of two people shot during a protest against the police killing of Breonna Taylor in Louisville, Kentucky. pic.twitter.com/EY8gOORFzR

This is the scene in Louisville, Kentucky pic.twitter.com/jwv4UPhDA3