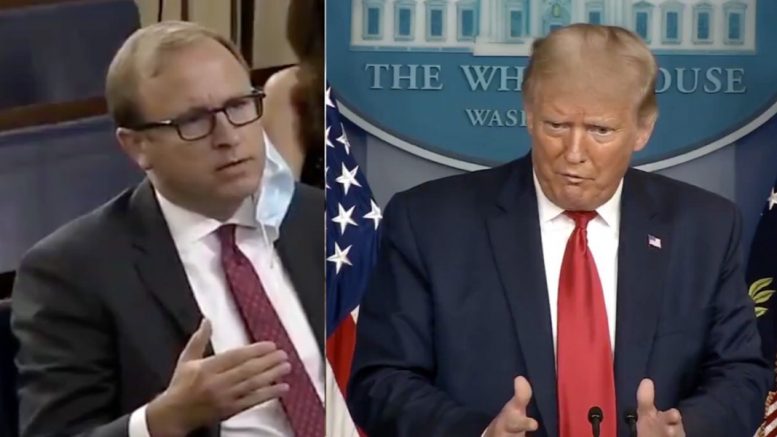 Thursday during a White House coronavirus task force briefing, President Trump fired back at Jon Karl for his “terrible question”, after the ABC News‘ White House correspondent accused the Commander in Chief of lying “to the America people”.

“Why did you lie to the America people, and why should we trust what you have to say now?” Karl asked the president.

“That’s a terrible question,” President Trump fired back. “And the phraseology, I didn’t lie. What I said is we have to be calm, can’t be panicked.”

The president acknowledged that Bob Woodward’s series of phone calls were recorded, adding, “Bob Woodward is somebody that I respect, just hearing the name from many, many years– not knowing too much about his work, not caring about his work. But I thought it would be interesting to talk to him for a period of … calls. I don’t know if it’s good or bad. I don’t know if the book is good or bad.”

Trump pointed out: “Certainly, if he thought that was a bad statement, he would’ve reported it, because he thinks, you know, you don’t want to have anybody that is going to suffer medically because of some fact. And he didn’t report it because he didn’t think it was bad. Nobody thought it was bad.”

Earlier on Friday, the Commander in Chief tweeted in regards to Woodward: “Bob Woodward had my quotes for many months. If he thought they were so bad or dangerous, why didn’t he immediately report them in an effort to save lives? Didn’t he have an obligation to do so? No, because he knew they were good and proper answers. Calm, no panic!” Continued Below

The president slammed Jon Karl saying, “And your question, the way you phrased that is such a disgrace. It’s a disgrace to ABC television network, it’s a disgrace to your employer, and that’s the answer. Are you ready?”

Karl argued that the president said the flu was more dangerous than the coronavirus, which prompted Trump to cite flu deaths.

“The flu is a very serious problem for this country also. … What I went out and said was very simple. I want to show a level of confidence, and I want to show strength as a leader, and I want to show that our country is going to be fine, one way or another. Whether we lose one person, we shouldn’t lose any, because this shouldn’t have happened. This is China’s fault. This is nobody’s fault but China. China should not have allowed it to happen,” the president explained. Continued Below

“Whether you have one person, 180K people, or 2 and half or 3 million people, which it could have been very serious, if we didn’t make the move,” Trump said. “And when you look at the opposition when they said ‘Oh, why did they put the ban on?’ Dr. Fauci said we saved 100’s of thousands of lives by putting the ban on China, and ultimately putting the ban on Europe.”

“There was no lie here,” the Commander in Chief bluntly said. “What we’re doing is we’re leading, and we’re leading in a proper way. And if frankly, somebody else was leading it, they wouldn’t have closed [the borders]. … Months later, [Democrats] said there’s no problem, they’re talking about me. … So obviously, outwardly, I said it’s a very serious problem, and it’s always a serious problem.”

The president told Karl that he is not going to “jump up and down in the air and start saying people are gonna die”, adding, “No, I’m not gonna do that. We’re gonna get through this, and I think right now, hopefully, we are rounding the final turn. A lot of good things are happening with the vaccines and with therapeutics.” Video Below

“And there’s no lying. But the way you asked that question is very disgraceful,” Trump declared. “… I don’t want to start jumping up and down and start screaming, ‘Death, death’, because that’s what it’s about. We have to lead a country–we’re leading a great country, and we’re doing a great job.”

First Question of the Briefing:@jonkarl: "Why did you lie to the American people and why should we trust what you have to say now?"

President Trump: "Such a terrible question and the phraseology. I didn't lie. What I said is we have to be calm, we can't be panicked." pic.twitter.com/naJ9YxJZD5

Meanwhile, Joe Biden on February 28th: “It’s not a time to panic about the coronavirus”.

Joe Biden on February 28: "It's not a time to panic about coronavirus" pic.twitter.com/y5ZLeAFRal

We leave you with this interesting take:

(Related: Dr. Fauci Strikes Down The Allegation That Trump Downplayed COVID-19 In The Early Stages: “I Didn’t Get Any Sense That He Was Distorting Anything”)