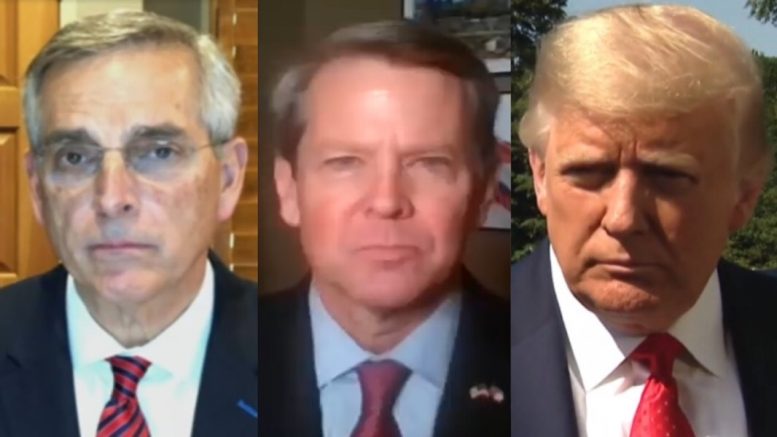 45th President Donald Trump issued a statement on Tuesday via email from his “Save America” PAC after an election integrity group received through Open Records Requests that 2020 ballot images were destroyed in 74 Georgia counties.

Seventy-four of Georgia’s counties have not been able to produce original images of ballots from the November 2020 election, according to an election integrity group. VoterGA, an election integrity nonprofit organization, received confirmation through Open Records Requests (ORRs) from 56 counties that either most or all of the images that the Dominion voting system automatically created for tabulating results have been destroyed, Just the News reported.

“Wow, look what was just found in Georgia. Why doesn’t Governor Brian Kemp do something about the large-scale Election Fraud that took place? Where is Secretary of State Brad Raffensperger? The people of Georgia get it!” Trump said, including a tweet from Heather Mullins at Real America’s Voice.

22 counties only have recount ballot images

6 counties had no images at all

As reported by Just the News:

Images of ballots are crucial for election records and are required by both federal and state law to be retained for 22 months and 24 months, respectively.

The images automatically created by the Dominion voting system for in-person ballots are on compact flash memory cards, while mail-in ballot images are on memory flash drives. The drives or cards are later manually uploaded to the Election Management Server in the county, and the more densely populated ones use high speed scanners to directly transfer images to the Election Management Server.

“At least 28 counties admitted having no original images at all and 22 of those counties only had recount images that some claimed are the same as originals,” According to VoterGA.

The organization noted that recount images do not have original time stamps that may be used for auditing nor the original meta data showing how the votes were originally interpreted. Recount images are invalid for an election audit because they can be changed by tampering between scans.

A total of another 28 counties admitted to VoterGA admitted they do not possess a complete set of original images. “Various counties were missing all in-person voting images, all absentee images, all Election Day images or a substantial portion of one or more of those groups,” the nonprofit noted.

Over a two-month period, there were another 18 counties that didn’t comply with repeated ORRs. While most didn’t respond, some requested “exorbitant fees for images that most counties provided for around $25-$50,” with the most being $1,700. There were six counties that claimed to mail VoterGA images that they haven’t received.