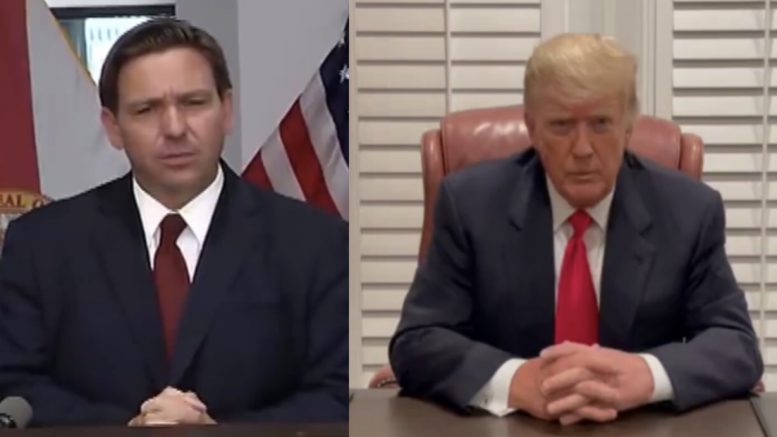 45th President Donald Trump told Fox News’ Sean Hannity on Thursday evening that leftwing media reports regarding an alleged conflict between him and Governor Ron DeSantis (R-FL) were “totally fake news”, adding, he intends to have a “good relationship” with him for “a long time”.

Trump’s pushback came after reports from The New York Times and Axios, who claimed that the 45th President was trashing DeSantis in private as an ingrate with a “dull personality” and no realistic chance of beating him in a potential 2024 showdown, as previously reported by The Freedom Times.

“I get along great with Ron. He was very good on the [Robert] Mueller hoax. He was right up front, along with Jim Jordan and all of the rest of them. They were fantastic. The Republicans really stuck together, and it was a great thing. Ron was one of them,” Trump said during a phone interview on “Hannity”, praising DeSantis for his work when he served in the House.

“Ron wanted to run [for governor], and I endorsed him, and that helped him greatly, and he went on, and he’s done a really terrific job in Florida. Ron has been very good. He’s been a friend of mine for a long time. It’s totally fake news,” he confirmed.

“I think Ron said last week, he said it very publicly, he said, ‘The press is never gonna get in the middle of my friendship with Donald Trump. We’re gonna do that stuff’. And he said it very strongly. It was very interesting actually and very nice. But he said that, and I agree with him on that 100%,” the 45th President expressed.

“I have a very good relationship with Ron and intend to have it for a long time,” he added. Video Below

Jon Voight On Trump Shielding America From COVID-19: “A Man That Will Protect His Country Till The End With Dignity, Honor, Respect & Love”