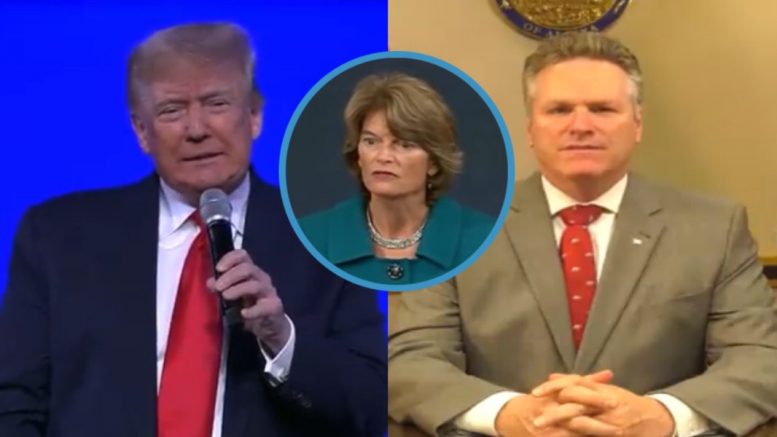 45th President Donald J. Trump issued an email statement on Tuesday from his “Save America” PAC, announcing his “complete and total endorsement” for Mike Dunleavy’s reelection for governor for the State of Alaska.

Trump, however, said his endorsement of Dunleavy is subject to his non-endorsement of Senator Lisa Murkowski (R-AK), clarifying, that if the Alaskan governor endorses Murkowski, that his “endorsement of him is null and void”.

Mike Dunleavy has been a strong and consistent Conservative since his time in the Alaska State Senate. I was proud to endorse his first run for Governor, and I am proud to support his reelection, too.

From his handling of the virus, support of the Constitution—including the Second and Tenth Amendments—taking advantage of all the opportunities Alaska has to offer, and his strong pushback against the Liberal Biden Administration’s attempt to hurt our great Country. Alaska needs Mike Dunleavy as Governor now more than ever.

He has my Complete and Total Endorsement but, this endorsement is subject to his non-endorsement of Senator Lisa Murkowski who has been very bad for Alaska, including losing ANWAR, perhaps the most important drilling site in the world, and much else.

In other words, if Mike endorses her, which is his prerogative, my endorsement of him is null and void, and of no further force or effect!

Trump’s feud with Murkowski goes back to at least 2018. Murkowski voted against the confirmation of Brett Kavanaugh to the Supreme Court that year and said in 2020 that Trump should not have named a replacement of the late Justice Ruth Bader Ginsburg after Republicans in 2016 declined to take up then-President Obama’s nominee to fill in a Supreme Court vacancy in an election year, according to The Hill.

President Trump had previously said that he will travel to Alaska to campaign against Senator Lisa Murkowski if she decides to seek reelection in the the Last Frontier. In November, Murkowski announced her reelection bid.

Kelly Tshibaka launched her challenge to unseat Sen. Lisa Murkowski in March, saying in part, “It is time we had a U.S. senator who represents Alaska to Washington, D.C., rather than one who represents D.C. insiders to Alaska”, as previously reported by The Freedom Times.

Trump issued a statement in June, announcing his “Complete and Total Endorsement” for Kelly Tshibaka of Alaska for Senate.

“Kelly Tshibaka is the candidate who can beat Murkowski—and she will. Kelly is a fighter who stands for Alaska values and America First. She is MAGA all the way, pro-energy, strong on the Border, tough on Crime and totally supports our Military and our great Vets,” Trump said in his statement.

“Kelly is a powerful supporter of the Second Amendment and JOBS! I look forward to campaigning in Alaska for Kelly Tshibaka. She has my Complete and Total Endorsement!” he announced. 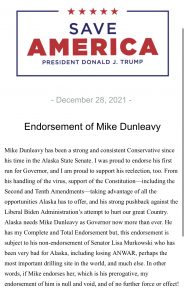 Related: Kelly Tshibaka Launches GOP Challenge To Unseat Sen. Murkowski: “It Is Time We Had A Senator Who Represents Alaska”)