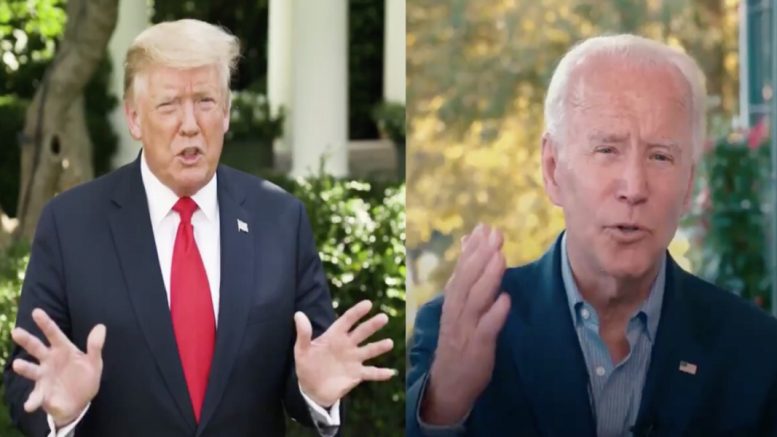 The Commander in Chief released a encouraging video message amid the coronavirus pandemic, saying it’s a “special date that celebrates so many different things, but more than anything else: freedom”, Biden on the other hand, called for America to tackle “systemic racism”.

President Donald Trump explained that the country is “making a comeback” amid the coronavirus pandemic and noted the economy was booming before “we got hit with this terrible plague from China”.

He continued: “We are getting close to fighting our way out of it. Our country is coming back; our job numbers are spectacular.”

“Our country will be greater than ever before,” the Commander in Chief optimistically predicted.. Video Below

Joe Biden’s Fourth of July message focused on racial injustice — from slavery to George Floyd’s death, calling for Americans to strive to achieve the country’s founding ideal of equality.

Biden claimed America’s history is no “fairy tale” as the country has never lived up to the words of the Declaration of Independence that “all men are created equal.”

“We have a chance now to give the marginalized, the demonized, the isolated [and] the oppressed a full share of the American Dream,” he said. “We have the chance to rip the roots of systemic racism out of this country.” Video Below

“We’re all created equal. We’ve never lived up to it — but we’ve never stopped trying,” Joe Biden tweeted. “This Independence Day, let’s not just celebrate those words, let’s commit to finally fulfill them.”

Our nation was founded on a simple idea: We're all created equal. We've never lived up to it — but we've never stopped trying. This Independence Day, let's not just celebrate those words, let's commit to finally fulfill them. Happy #FourthOfJuly! pic.twitter.com/1WrATlx8Xl

“Our founding promise has never been guaranteed. Each generation has been called to bring us a little closer to our highest ideals—and history’s calling on us right now. So let’s all do whatever we can to help @JoeBiden expand that promise to all Americans,” Obama tweeted.

(Related: Kaepernick On Independence Day: “We Reject Your Celebration Of White Supremacy”)