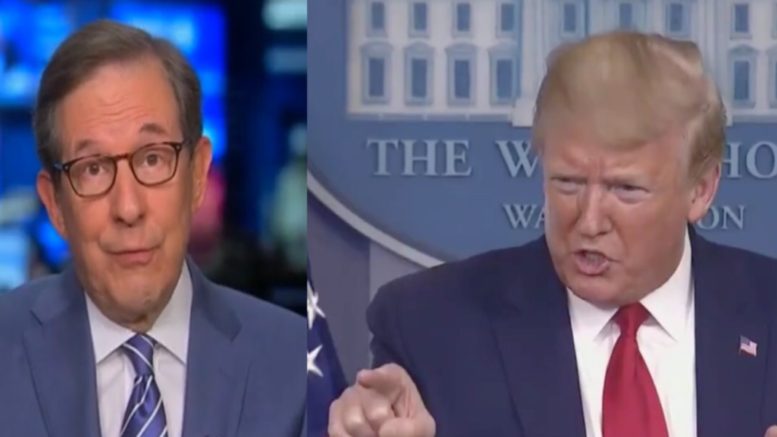 President Donald Trump took to Twitter on Sunday, slamming host “wannabe” Chris Wallace and Fox News, wondering “what the hell is happening” to the network.

The president also suggested on Saturday that OANN is a “great alternative”.

“Just watched Mike Wallace wannabe, Chris Wallace, on @FoxNews. I am now convinced that he is even worse than Sleepy Eyes Chuck Todd of Meet the Press (please!), or the people over at Deface the Nation,” the Commander in Chief tweeted on Sunday.

“What the hell is happening to @FoxNews[?] It’s a whole new ballgame over there!” he pointed out.

It is not specifically clear what the president was referring to pertaining to the “Fox News Sunday” host, however, Chris Wallace had brought up a New York Times report with guest Dr. Thomas Inglesby, in which the Times had claimed the president did not act sooner on the coronavirus. Wallace asked: “How much did those lost weeks cost us?”

The president continued his attack against the media on Twitter Sunday writing, “If the Fake News Opposition Party is pushing, with all their might, the fact that President Trump ‘ignored early warnings about the threat,’ then why did Media & Dems viciously criticize me when I instituted a Travel Ban on China? They said ‘early & not necessary.’ Corrupt Media!” Continued Below

The president also noted on Twitter Sunday: “The Opposition Party (Lamestream Media) and their partner, the Radical Left, Do Nothing Democrats, have put their political game plan in full swing. ‘Whether he is right or wrong, it doesn’t matter. Criticize ’Trump’ for everything, and don’t let the public see Biden. Hide him.”

“Watching @FoxNews on weekend afternoons is a total waste of time. We now have some great alternatives, like @OANN,” he suggested Saturday on Twitter.

Also on Saturday, the president tweeted: “When the Failing @nytimes or Amazon @washingtonpost writes a story saying ‘unnamed sources said’, or any such phrase where a person’s name is not used, don’t believe them. Most of these unnamed sources don’t exist. They are made up to defame & disparage. They have no ‘source'”. Video Below

He added: Does anyone ever notice how few quotes from an actual person are given nowadays by the Lamestream Media[?] Very seldom. The unnamed or anonymous sources are almost always FAKE NEWS.”

“So now the Fake News @nytimes is tracing the CoronaVirus origins back to Europe, NOT China. This is a first! I wonder what the Failing New York Times got for this one? Are there any NAMED sources? They were recently thrown out of China like dogs, and obviously want back in. Sad!” the president expressed.

Chris Wallace asks: “How much did those lost weeks cost us?” pertaining to the coronavirus: