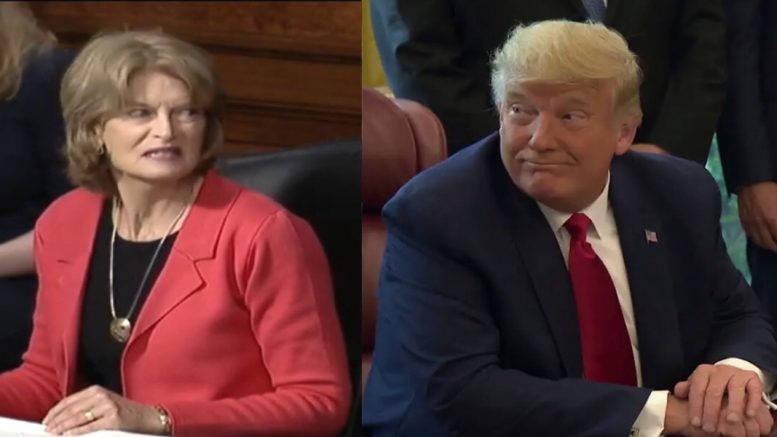 The 45th President told The Hill in a statement that he will travel to Alaska to campaign against Senator Lisa Murkowski (R) next year as she seeks reelection in the the Last Frontier.

Murkowski, who first took office in 2002, has been a longtime critic of the former president and top GOP wild card in recent votes. She bucked her party this week by announcing she’d back Rep. Deb Haaland’s (D-N.M.) nomination to serve as Interior secretary, and she was one of seven Senate Republicans to vote to convict Trump in his impeachment trial last month, reported The Hill.

“I will not be endorsing, under any circumstances, the failed candidate from the great State of Alaska, Lisa Murkowski. She represents her state badly and her country even worse. I do not know where other people will be next year, but I know where I will be — in Alaska campaigning against a disloyal and very bad Senator,” President Trump said in a statement to The Hill.

“Her vote to advance radical left democrat Deb Haaland for Secretary of the Interior is yet another example of Murkowski not standing up for Alaska,” the president expressed over her decision.

Trump’s feud with Murkowski goes back to at least 2018. Murkowski voted against the confirmation of Brett Kavanaugh to the Supreme Court that year and said in 2020 that Trump should not have named a replacement of the late Justice Ruth Bader Ginsburg after Republicans in 2016 declined to take up then-President Obama’s nominee to fill in a Supreme Court vacancy in an election year, according to The Hill.

Moreover, in a pair of tweets last summer, President Trump had already expressed his intention to campaign against Murkowski, writing in part, “Few people know where they’ll be in two years from now, but I do, in the Great State of Alaska (which I love) campaigning against Senator Lisa Murkowski. … Get any candidate ready, good or bad, I don’t care, I’m endorsing. If you have a pulse, I’m with you!” Continued Below

Last month, the 45th President warned sitting Republican lawmakers that he could back primary challengers if he deems them to be insufficiently loyal, saying in statement, “Where necessary and appropriate, I will back primary rivals who espouse Making America Great Again and our policy of America First. We want brilliant, strong, thoughtful, and compassionate leadership.”

On Friday, President Trump released three statements Friday via email, announcing his “complete and total endorsement” for Henry McMaster, the governor of South Carolina since January 24, 2017, for Lieutenant Governor Tim Griffin, who is running for Attorney General in Arkansas, and also for Republican Senator Mike Crapo of Idaho.

The 45th President has also recently endorsed former campaign adviser Bob Paduchik in the race to be the next chair of the Ohio Republican Party and former White House press secretary and close ally Sarah Huckabee Sanders in her gubernatorial bid for Arkansas governor. Continued Below

Additionally he has endorsed Senator Tim Scott (R-SC), Senator Jerry Moran (R-KS), congressional candidate Max Miller, a former White House aide who is in the race against an incumbent Republican in Northeast Ohio, and Republican Senator John Kennedy of Louisiana.

Republicans are only five seats away from gaining control of the House and one seat away from taking back the Senate.

Reminder: In 2018, Sarah Palin took to Twitter after Murkowski voted against Kavanaugh in the cloture vote and wrote: “Hey @LisaMurkowski- I can see 2022 from my house…”

Trump: ‘We Are Welcoming The Freedom Convoy With Open Arms To Communicate Freely On TruthSocial’