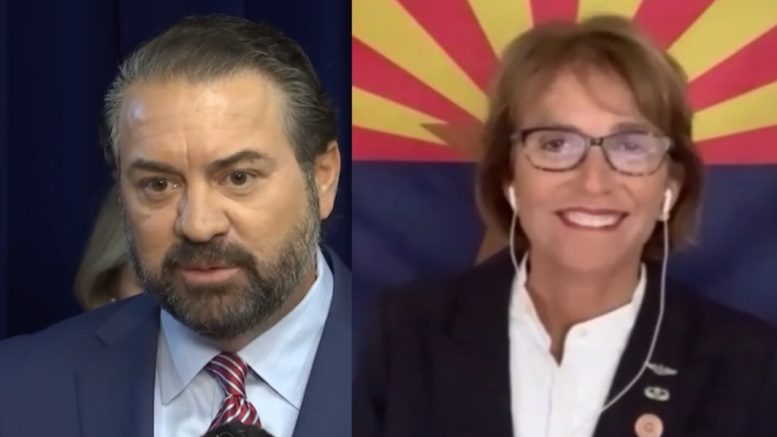 Arizona State Senator Wendy Rogers (R), during an interview last week with Dave on the X22 Report, spoke on the Maricopa County forensic audit that took place at the Veterans Memorial Coliseum in Phoenix over the summer and reiterated her stance in calling for the Arizona attorney general to make arrests as three different individuals reportedly deleted data, in regards to the 2020 general election.

Asked what does she make of the findings found from the Arizona forensic audit and where does she see it going, State Senator Wendy Rogers responded, “Where we are right now is the fact that Attorney General [Mark] Brnovich … has all of the data sets from the audit, which … was presented at the ‘big reveal’ on the 24th of September.”

“All of that [information] was given to [Brnovich], including the fact, that there is visual imagery of three different individuals, humans, in front of their computers, deleting information in an anticipation of the subpoenas being served to them,” she said. “[Brnovich] has had these data sets … going on 60 days now.”

“And we’re impatient. I want perp walks. I want arrests, and I’m just not having it,” Senator Rogers expressed. “I have been keeping up the pressure. If you ask me, Senator, how much longer is it going to take? I would tell you that I don’t know, but that, I think he can be doing certain things now like making arrests. And failing that though, we wait”.

“What will also become evident though, is that other counties in Arizona may also have had anomalies that need to be looked at by him. In that case, it’s gonna be a much far more ranging criminal investigation, which it already is,” she explained, before noting that Adrian Fontes, the former Maricopa County recorder has been interviewed by Brnovich’s “legal beagles”. Continued Below

Senator Rogers also told listeners, “Don’t be misled. … You have to understand that there’s so much more than meets the eye in these kinds of things. And there is so much more involved in a criminal investigation that we are not privy to.”

“And so, I will say conclusively that I have complete faith in our State Senate, especially, President Karen Fann. And I think, at the end of the day, we will have a comprehensive takedown of this criminal operation,” she added.

.@GeneralBrnovich if you need more help let us know. You need to do something soon. We are getting tired of waiting.

Logan sent the info to the lawyers on the splunk logs and routers. What is taking so long? Lawyers get it done.

The Special Master is getting paid big money to give us access to the routers and splunk logs. For that much money an hour he needs to do his job.