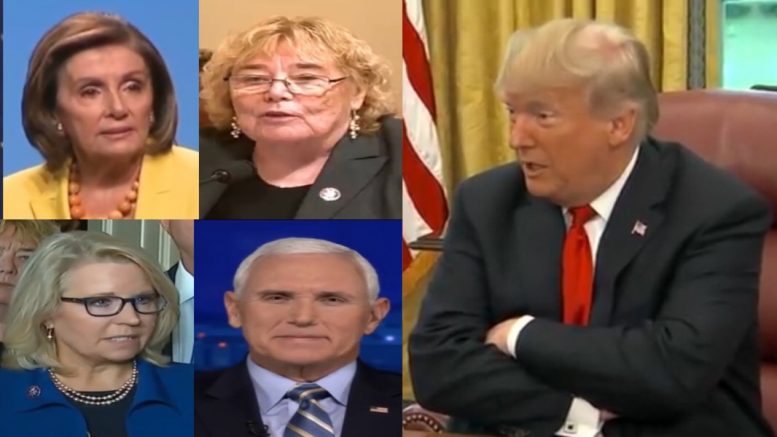 45th President Donald J. Trump issued an email statement on Tuesday calling the members of the House of Representatives’ Select Committee investigating the 2021 Capitol protest “political hacks, liars, and traitors” as members of the Committee have reportedly been considering reform of the 1887 Electoral Count Act since at least October..

A group of Senate Democrats on Tuesday unveiled legislation that would reform an 1887 election law that has been in the spotlight in the wake of the 2020 election. The proposal – from Sen. Angus King (I-Maine), who caucuses with Democrats, Rules Committee Chairwoman Amy Klobuchar (D-Minn.) and Judiciary Committee Chairman Dick Durbin (D-Ill.) – would clarify that the vice president’s role overseeing the formal counting of the Electoral College vote is ceremonial, Yahoo News reported.

The bill from King, Klobuchar and Durbin comes as a separate, bipartisan group led by Sens. Susan Collins (R-Maine) and Joe Manchin (D-W.Va.) are working on their own proposal to reform the Electoral Count Act. That group, which includes 16 senators, met on Monday night with the goal of reconvening as soon as Friday to determine how much progress they’ve made.

Some of the areas the two groups are working on overlap: The Manchin-Collins group wants to clarify that the vice president’s role is ceremonial and increase the number of lawmakers that need to sign onto an objection in order to force a vote. Continued Below

Meanwhile, the House Administration Committee issued a 31-page report on January 14 following months of review by legal experts and staffers. It recommended that the vice president no longer preside over the process of certifying the votes and the Senate president pro temp fulfill that role. The report also recommended clarifying that “the presiding officer does not have substantive discretion over counting votes.”

California Democratic Rep. Zoe Lofgren, who chairs the House Administration panel and sits on the Jan. 6 committee told NPR shortly before the report was released, “This is a statute that’s over 100 years old. It has ancient language that may not be as clear as we’d want, and we are now observing the potential of threats to the orderly running of elections and apolitical running of elections in the future.”

The House Administration staff report says the vice president should not preside at the count. After all, the vice president is often on their party’s ticket, either seeking the top spot or a second term on the job. Rather, the presiding officer should be the Senate president pro tempore, usually a senator of the majority party with the most seniority, the report said. Continued Below

In a statement on Tuesday, the 45th President weighed in over Democrats trying to “alter the Electoral Collage Act”.

“So pathetic to watch the Unselect Committee of political hacks, liars, and traitors work so feverishly to alter the Electoral College Act so that a Vice President cannot ensure the honest results of the election, when just one year ago they said that ‘the Vice President has absolutely no right to ensure the true outcome or results of an election'”, Trump said.

“In other words, they lied, and the Vice President did have this right or, more pointedly, could have sent the votes back to various legislators for reassessment after so much fraud and irregularities were found. If it were sent back to the legislators, or if Nancy Pelosi, who is in charge of Capitol security, had taken my recommendation and substantially increased security, there would have been no ‘January 6’ as we know it! he pointed out.

“Therefore, the Unselect Committee should be investigating why Nancy Pelosi did such a poor job of overseeing security and why Mike Pence did not send back the votes for recertification or approval, in that it has now been shown that he clearly had the right to do so!” Trump explained. Continued Below

In a statement issued on Sunday criticizing Democrats and “RINO” Republicans, Trump said that former Vice President Mike Pence did have the power to overturn the election. “Unfortunately, he didn’t exercise that power, he could have overturned the Election!” he said.

“So pathetic to watch the Unselect Committee of political hacks, liars, and traitors work so feverishly to alter the Electoral College Act so that a Vice President cannot ensure the honest results of the election, when just one year ago… pic.twitter.com/IagKnvPr5M

“If the Vice President (Mike Pence) had “absolutely no right” to change the Presidential Election results in the Senate, despite fraud and many other irregularities, how come the Democrats and RINO Republicans, like Wacky Susan Collins, are… pic.twitter.com/9kz05Jwi7y

(Related: Trump Issues A Statement On New Movie Trailer ‘That Shows The World Exactly How The 2020 Presidential Election Was Rigged & Stolen’