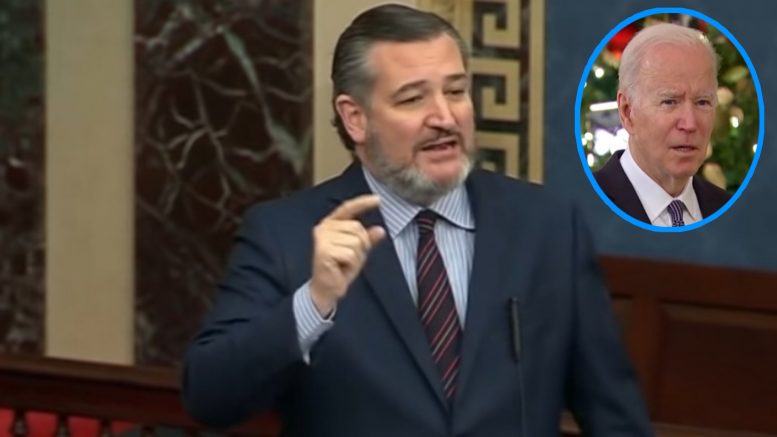 Sen. Ted Cruz (R-TX) slammed Joe Biden in a speech delivered in the Senate chamber on Tuesday in an effort to pass legislation to block the Nord Stream 2 pipeline, which Cruz argues would “enable” Russian President Vladimir Putin and “devastate” Ukraine if it is brought online.

Nord Stream 2 stretches for 1,200 kilometres from Vyborg in Russia through the Baltic Sea to Lubmin in Germany, bypassing Ukraine and Poland, as reported by CNBC.

For the last two years, Sen. Cruz has led the fight to stop Nord Stream 2, and worked with Democrats and the Trump administration to stall it—until President Biden was elected and refused to impose the current congressionally-mandated sanctions on Putin’s pipeline. Sen. Cruz is committed to using all of his leverage as a U.S. Senator, including blocking nominations to the State Department, to force the Biden administration to reverse its decision, and today objected to a motion to confirm President Biden’s nominee for chief of protocol at the State Department, Rufus Gifford, over the issue.

Right now, as we speak, hundreds of thousands of Russian troops are amassed on the border of Ukraine, waiting to invade. This calamitous foreign policy disaster is Joe Biden’s fault. This is the direct consequence of Joe Biden’s surrender to Vladimir Putin on Nord Stream 2. What is Nord Stream 2? It is a pipeline being constructed from Russia to Germany to carry natural gas. Putin is building Nord Stream 2. Why? To go around Ukraine, because right now, Russian gas goes through Ukraine. Putin didn’t just wake up recently and decide to invade Ukraine. He’s wanted to invade Ukraine for years, he did so in 2014, but he stopped short of full invasion. Why? Because the Ukrainian energy infrastructure was necessary to get the Russian gas to market. Nord Stream 2 is all about building an alternative avenue to get the Russian gas to Europe so then the Russian tanks can ride into Ukraine.

When Biden waved sanctions on Nord Stream 2, Ukraine and Poland both said it was creating a security crisis in Europe, that it was increasing dramatically the chances that Russia would invade Ukraine. This invasion that we are facing, the very real prospect of, is Joe Biden’s fault. But you know what? It is also the fault of Senate Democrats. For two years, we had bipartisan agreement to stop Nord Stream 2 and we succeeded. And when there was a Republican president in office, Donald Trump, I and other Republicans were perfectly willing to hold President Trump to account to press him to stand up against Nord Stream 2. And he did. As soon as a Democrat got in the White House, our Democratic colleagues decided that partisan loyalty was more important than national security.

I want to be very clear: A lot of discussion about Joe Biden’s having a phone call with Putin today. Well, that phone call’s real nice, but it’s not going to stop an invasion. I’ll tell you what will stop it invasion. Joe Biden could stop the invasion today by simply following the law and sanctioning Nord Stream 2. And this body could make a major step today to prevent war in Europe, to prevent Russia from invading Ukraine right now, by doing what Democrats and Republicans had agreed to do—had done together—until Biden’s surrender to Russia. We can do that by passing legislation that I have pending at the desk that would sanction Nord Stream 2, that would stop the project, which would mean Russia would remain dependent on Ukrainian energy infrastructure. And for the same reason Russia didn’t continue to invade in 2014, it would stop the invasion. We can do that right now. Video Below