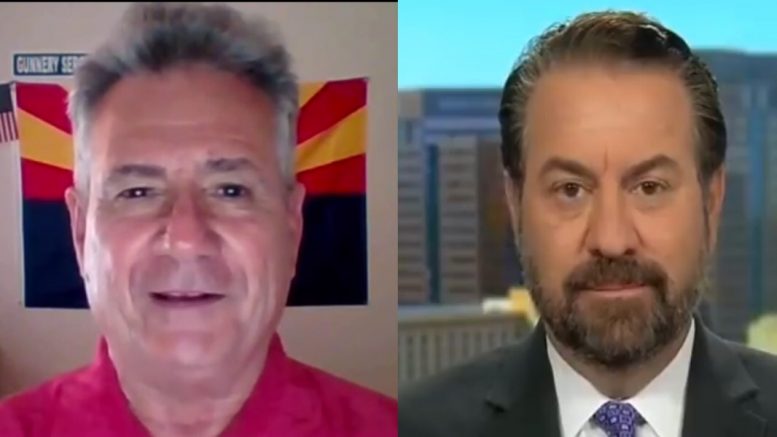 Arizona State Senator Sonny Borrelli (R) on Tuesday, told John Fredricks during an interview on America’s Real Voice “Outside the Beltway“, that “all of the evidence” from the Maricopa County forensic audit is “being turned over” to Arizona Attorney General Mark Brnovich (R) “for criminal investigation, and or, hopefully, criminal prosecution”.

“People need to be prosecuted for this. We’ve identified three individuals already,” Senator Borrelli disclosed. “Their names are being withheld right now, because, you know, everybody is presumed innocent until proven guilty”.

“But we also want to protect them anyways, you know, just in case they commit suicide or they disappear, or whatever. But that’s going to be turned over to law enforcement, i.e. attorney general,” he said.

“What we have here is an ongoing conspiracy of a coverup that’s been perpetuated by the Maricopa County board of supervisors and the secretary of state’s office in perpetuating by the fake news mainstream media. And what they’re conducting now is more of a black out operation, where they’re blocking out, blacking out all facts of what the audit was; the results. They’re involved in a propaganda psyop,” Borrelli suspected.

“They’re putting out misinformation, disinformation to do numerous things to distract and distort the truth and to also demoralize everybody to think that, ‘Oh, it’s over. This was a failure. The audit was a complete failure and it’s a nothing burger, and that’s why they did on a Friday.’ You know, here’s the funny thing: The press got ahold of a partial, incomplete draft of the audit report, which is ridiculous,” he expressed. Continued Below

“And the county attorney, Mr. Liddy, because it was reported in the newspaper — he released it to the newspapers,” Senator Borrelli said.

“The audit team was not there to determine a winner or loser. They’re just supposed to report the data,” Borrelli added. Video Below