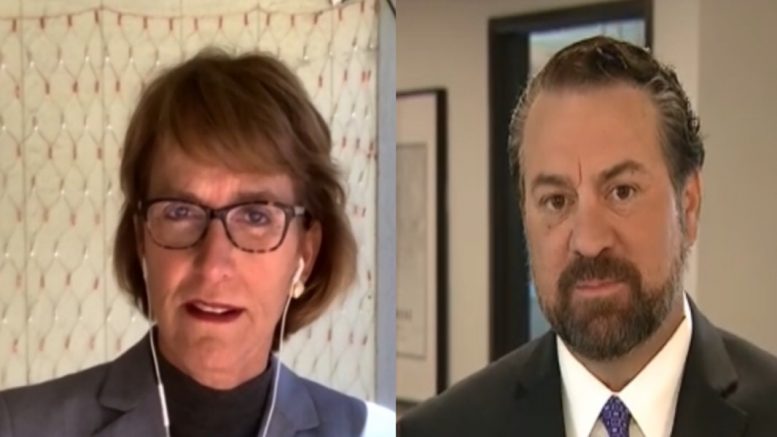 “Elections have consequences and stolen elections have worse consequences. We’re the only State that’s done a deep dive, a cyber forensic audit of 2.1 million ballots. As many of you know, we had the final hearing on that on the 24th of September. It’s now in the hands of our Arizona Attorney General [Mark] Brnovich,” she said.

“I have been writing, heard, very strongly, on him to make arrests. We have imagery of three different individuals who deleted data. This is evidence that was put forward on September 24th,” Senator Rogers explained.

During the Arizona Senate hearing, Ben Cotton of CyFir– revealed that election results were purged from the EMS the day before the forensic audit began. Moreover, during a hearing in the House Oversight and Reform Committee on October 7th, Maricopa County Board of Supervisor officials admitted under oath, that they deleted election data after they received a subpoena from the Arizona State Senate.

“There is a hue and a cry for accountability, and we want arrests made. We want to proceed with getting to the bottom of the truth of 2020,” the Arizona State Senator said.

Asked what can we can do to help Arizona, Senator Rogers said, “You can contact Arizona Attorney General Brnovich and tell him how strongly you feel about him following through on the evidence he has. You can also, if you would please, go to my website, WendyRogers.org, and on the landing page in the upper right corner, click on the link that says you want to sign to decertify the Presidential Election of 2020. You will be joining over 1 million Americans who’ve already signed at WendyRogers.org.” Continued Below

“Also, I have put out a letter, we call it the ‘Audit 50 States Letter’. We need every possible State senator and State representative from all over the nation to sign, to recall the electors in their State,” Senator Rogers said. “We’ve already had over 100 State senators and State representatives sign this ‘Audit 50 States Letter’. Please communicate to me through ‘[email protected]'”.

146 legislators from 38 States have now signed a letter calling for all 50 U.S. states to be audited, and electors to be decertified “where it has been shown the elections were certified prematurely and inaccurately”, as previously reported by The Freedom Times.

“This is based on the fact that in the U.S. Constitution, the founders gave State legislators the plenary power to oversee the U.S. Presidential Election. And so, it is up to State senators and State representatives to understand what their role is when they took their oath sally forth and be strong. Every State needs to have a few,” Rogers explained. Video Below

“So if you out there listening, know that are one or two State legislators in your State, who are strong for election integrity, you need to tee them up, introduce them to me through ‘[email protected]’ and we will get them signed up. Don’t send me any wishy-washy people. I only want strong, resolute State legislators who understand that we are on a very precarious precipice right now in this country,” Senator Rogers added.

Arizona State Senator Wendy Rogers remarks begin at the 15:35 mark into the video:

Dominion Reportedly Threatens To Sue Lindell ‘Imminently’, MyPillow CEO Reacts: “If They Sue Me, I Would Be So Happy”