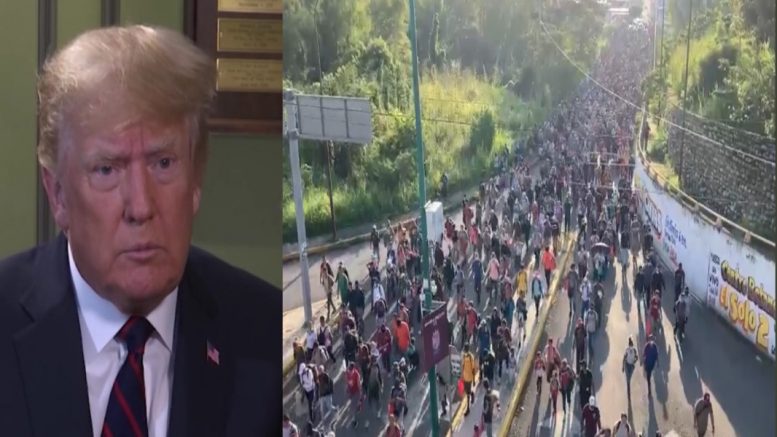 45th President Donald J. Trump issued a statement via email from his “Save America” PAC, warning Americans that the country is being “poisoned” by the surge of illegal immigrants “flowing through our Borders” and called for completing the border wall construction, which 78-year-old Joe Biden halted when he took office.

Trump’s statement comes amid a migrant caravan continuing its trek to the U.S. after clashing with police in the southern Mexico city of Tapachula over the weekend — making their way to the southern border, carrying signs with Biden’s name on them.

“Our Country is being poisoned with the millions of people that are illegally flowing through our Borders, in most cases not even questioned or stopped. Many are criminals from the emptied prisons of other countries, most of these are very dangerous people. Our Country is dying from within and nobody is doing anything to stop it,” the 45th President said in statement.

“The first thing that should be done, and it can be done quickly, is FINISH THE WALL. A deal must be made with Mexico, where Mexico serves as a 2,000 mile barrier, not a launching pad for the illegals that are coming in,” he recommended.

Along with construction of the wall, Biden reversed or ended a number of Trump’s immigration policies, which resulted in a surge of immigrants arriving at the southern border from Mexico and Central and South America, New York Post reported.

US Customs and Border Protection detained a record-high 1.7 million undocumented immigrants over the previous 12 months, officials said, as reported by New York Post. Continued Below

The 45th President further raised concerns over the Afghan’s transported to the US after the Biden administration withdrew from Afghanistan at the end of August. He continued by pointing out the trouble Biden has created.

“Also, 97 percent of the people that came in from Afghanistan rushed the planes and should not be here. Those people must be checked very carefully because many of them will turn out to be strongly related to high-level terrorism,” Trump explained.

“How stupid our Country has become, so sad to watch when just 10 months ago we had none of these problems, and none either with bad economy, inflation, fuel prices going through the roof, and so much else,” he said. Continued Below

“And never forget, because the Fake News will not talk about it any longer, those needlessly killed in Afghanistan and the thousands of people and the $85 Billion worth of Military equipment left behind in the complete and total surrender by the United States of America,” he noted.

In another email statement on Sunday, Trump said, “The largest caravan in history is coming towards us, and we are totally unprepared and doing nothing about it. Complete the wall and get tough. Our Country is being systematically destroyed before our very eyes! ”

Meanwhile, video footage has surfaced online of the migrant caravan headed to the U.S.:

Large migrant caravan has left Tapachula, Mexico for the US.
The migrants are carrying banners that read "We come in peace" and "Joe Biden is for everyone" (Politico) pic.twitter.com/V9nevmpRu3

Thousands of migrants are making their way up through Mexico to the United States. This video was recorded near Tapachula. pic.twitter.com/rw2xuOXzci

“Thousands of migrants in a brand new caravan literally forcing their way through” to the U.S.

Yet, the day before he heads to Delaware for vacation, Biden says he doesn’t have “time” to go to the border and fix the mess he created. pic.twitter.com/CNHtvtYwGp 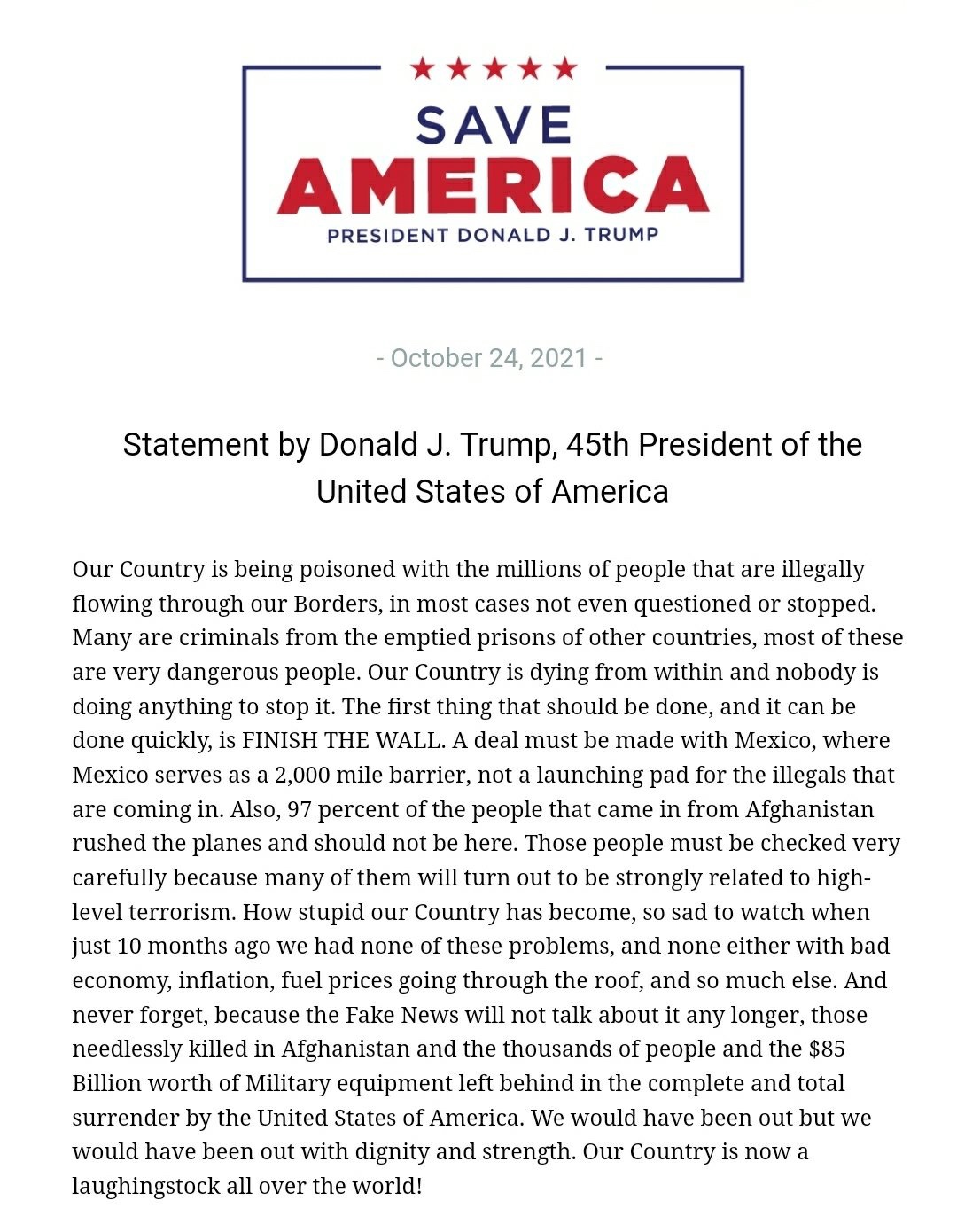 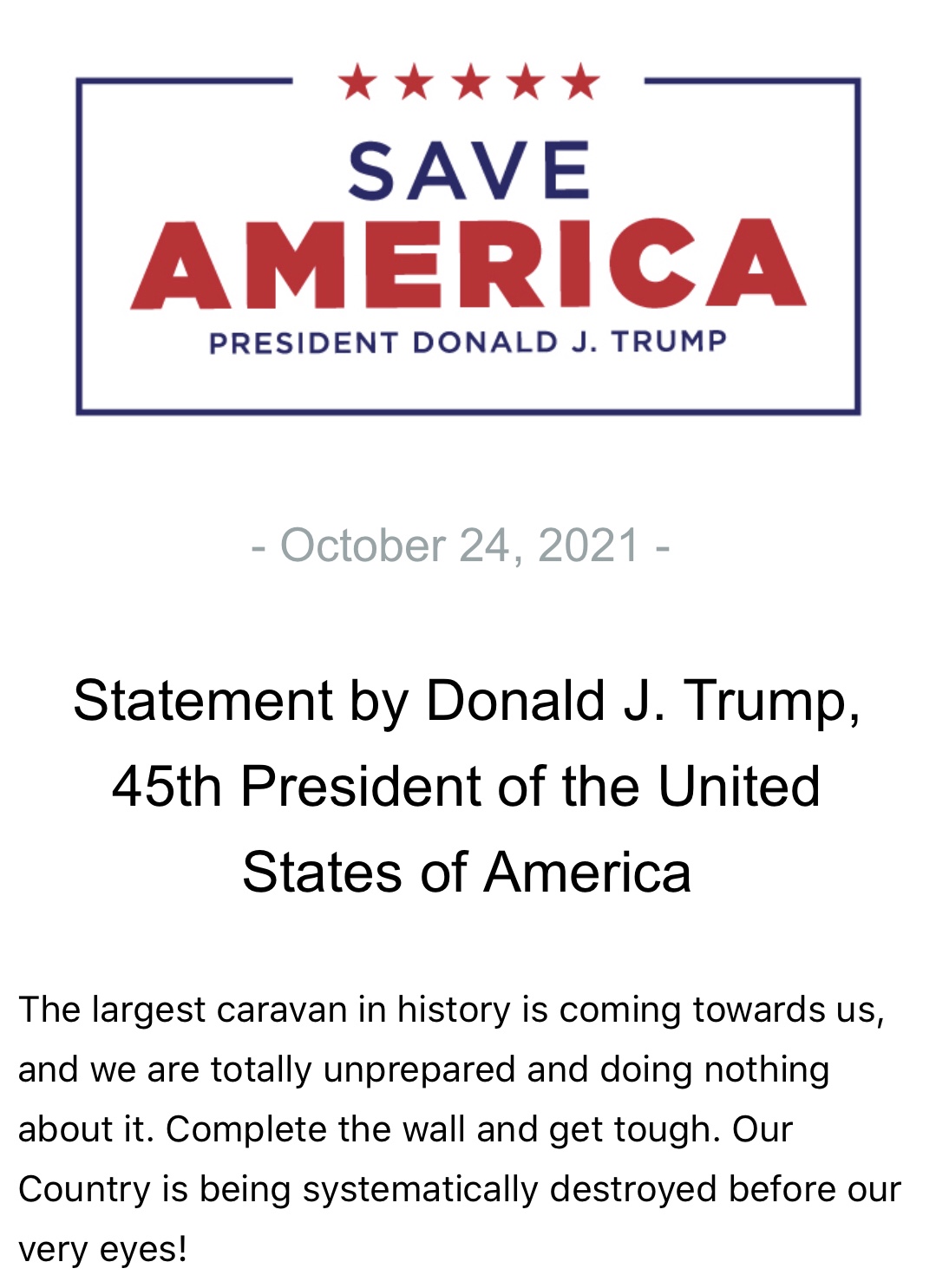 (Related: Candace Owens: “Let’s Stop Calling It A Border Crisis… This Is A Border Plan”)