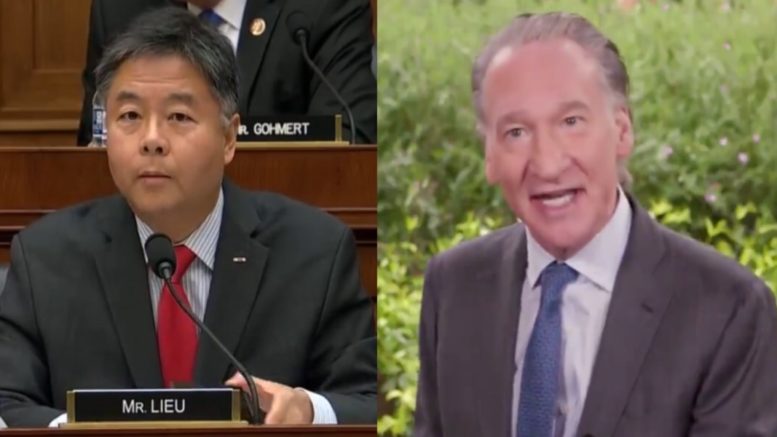 Friday, HBO’s “Real-Time” host Bill Maher ripped Rep. Ted Lieu (D-CA) and other Democrats for their outrage over COVID-19 being named from where it originated and wondered, “Can’t we even have a pandemic without being offended?”

The remarks came after President Trump had referred to the coronavirus as the “Chinese virus”, which sent Rep. Lieu, other Democratic lawmakers, and the leftwing media into a frenzy.

“New rule: you can’t yell at someone for breaking a rule you just made up. Scientists, yes, scientists, who are generally pretty liberal, have been naming diseases after the places they came from for a very long time,” Maher explained.

“Zika is from the Zika Forest, Ebola from the Ebola River, hantavirus the Hantan River,” he continued. “There’s the West Nile virus and Guinea worm, and Rocky Mountain spotted fever and, of course, the Spanish flu.”

“MERS stands for Middle East respiratory syndrome,” the “Real-Time” host said. “It’s plastered all over airports, and no one blogs about it. So why should China get a pass?”

Maher then displayed a tweet by Rep. Ted Lieu, who criticized Rep. Paul Gosar (R-AZ) for calling the coronavirus “the Wuhan Virus” last month. Continued Below

“I am announcing that I, along with 3 of my senior staff, are officially under self-quarantine after sustained contact at CPAC with a person who has since been hospitalized with the Wuhan Virus. My office will be closed for the week,” Rep. Gosar tweeted March 8.

“Dear @DrPaulGosar: I will pray for you, your staff & the person hospitalized. Also, calling #COVIDー19 the Wuhan Virus is an example of the myopia that allowed it to spread in the US. The virus is not constrained by country or race. Be just as stupid to call it the Milan Virus,” Rep. Lieu responded.

“No, that would be way stupider because it didn’t come from Milan,” said Maher. “And if it did, I guarantee we’d be calling it the Milan virus. Jesus f—ing Christ. Can’t we even have a pandemic without getting offended? When they named Lyme disease after a town in Connecticut, the locals didn’t get all ticked off.” Continued Below

“Seriously, it scares me. There are people out there that would rather die than call it by the wrong name? This isn’t about vilifying a culture, this is about facts. It’s about life and death. We’re barely four months into this pandemic, and the wet markets in China, the ones where exotic animals are sold and consumed, are already starting to reopen,” he added.

“The PC Police say it’s racist to attack any cultural practice that’s different than our own. I say liberalism lost its way when it started thinking like that. … It’s not racist to point out eating bats is bat sh*t crazy,” Maher expressed. … So when someone says, ‘What if people hear Chinese Virus and blame China?’ The answer is, we should blame China. Not Chinese Americans, but we can’t stop telling the truth because racists get the wrong idea.”

“Sorry, Americans. We’re going to have to ask you to keep two ideas in your head at the same time: This has nothing to do with Asian Americans, and it has everything to do with China,” Maher explained. “We can’t afford the luxury anymore of nonjudginess towards a country with habits that kill millions of people everywhere because this isn’t the first time.

“SARS came from China and the bird flu and the Hong Kong flu, the Asian flu. Viruses come from China just like shortstops come from the Dominican Republic. If they were selling nuclear suitcases at these wet markets, would we be so nonjudgmental?” he asked. Video Below

Dear @DrPaulGosar: I will pray for you, your staff & the person hospitalized.

Also, calling #COVIDー19 the Wuhan Virus is an example of the myopia that allowed it to spread in the US. The virus is not constrained by country or race. Be just as stupid to call it the Milan Virus. https://t.co/of91p65mIO