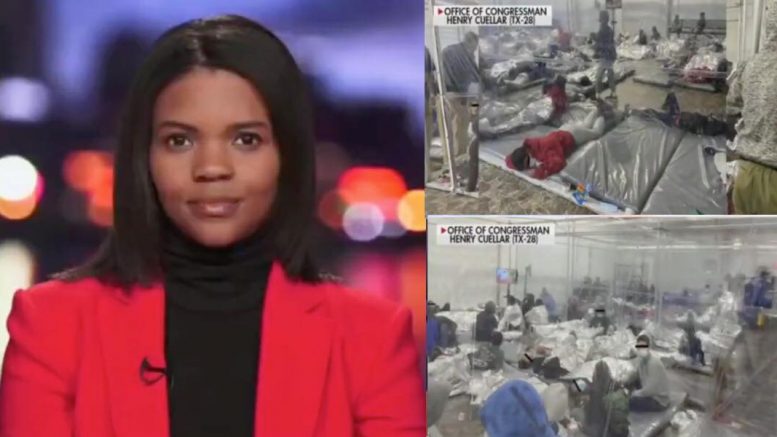 During a Monday interview on Fox News, Candace Owens told host Tucker Carlson that the situation at the U.S. southern border is “not a border crisis”, but rather a “border plan”, regarding the massive surge of unaccompanied children and illegal aliens under the Biden administration.

“I’ve been warning Black America this is what was going to happen if the Democrats assumed power– that our vote was not even going to become a topic of debate much longer because they would flood in illegal immigrants. And that’s exactly what they’re doing, Tucker. I mean, I didn’t have a crystal ball,” Owens said.

“I will say this: let’s stop calling it a border crisis. I was able to predict this, because this is a border plan,” Candace Owen insisted before clarifying.

“This is what the Democrats want to happen. This is why they are not answering any of the questions that you have tonight, because they want to import these illegals. They see them as their next victim voters. What I mean when I say victim voters is that they’re going to implement the same plan they have executed successfully on Black America for the last 6 decades,” she said.

“What comes next for illegal immigrants? Free stuff! Free, free, free! Free healthcare, Tucker. Free hotel rooms, more free stuff to make sure I, the Democrat that I want you to vote for, forever stays in power. Vote for me, and I’ll give you more free stuff. And it will keep going on and on like this until they wake up and realize that their lives are not getting better,” Owens explained.

She added: “Black Americans are just about starting to wake up to conservative principles and realizing that their lives [have] not gotten better under Democrats’ policies. And what happens? Well, it doesn’t matter anymore, Tucker, because they’re importing a new block of voters, and those voters are Hispanic illegal immigrants who are coming over the border.” Continued Below

(Related: Candace Owens Recalls Her Favorite Fifteen Seconds While Facing Off With Congress)

“They don’t care because they got paid. It was never about Black America, these were the puppet masters to make sure Black Americans remained allegiant to a Party that does not help them”, Owens said of Rep. Maxine Waters (D-CA), Rep. Sheila Jackson Lee (D-TX), Al Sharpton, and Jesse Jackson.

She also tweeted a clip of her interview with Tucker Carlson and wrote, “It’s not a border crisis, it’s a border plan. Bye-bye, Black America. Don’t say I didn’t warn you.” Video Below