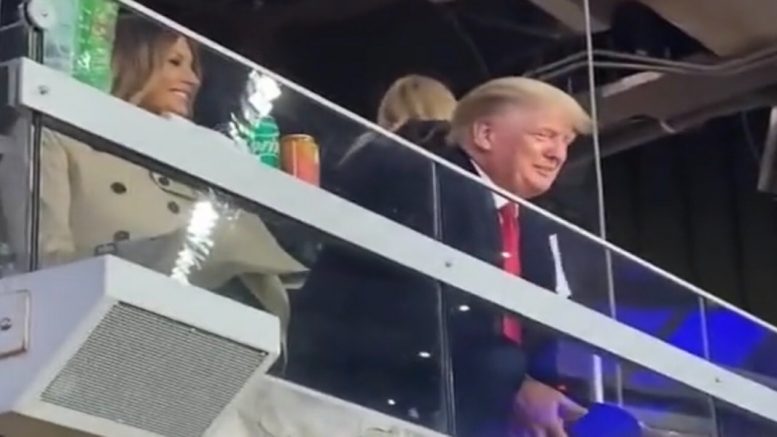 45th President Donald Trump and his wife, former First Lady Melania Trump, were seen in an open-air suite at Truist Park during Game 4 of the World Series on Saturday evening, appearing to enjoy a “Let’s go Brandon!” chant from MLB fans in nearby stands.

The phrase started after an October 2nd NASCAR race at the Talladega Superspeedway in Alabama, when Brandon Brown, a 28-year-old driver, had won his first Xfinity Series and was being interviewed by an NBC Sports reporter. Spectators behind Brown could be heard chanting “F**k Joe Biden, but the reporter suggested they were chanting “Let’s go, Brandon” to cheer the driver.

Over the past few months, sporting games and events across the nation have erupted with fans chanting “F*** Joe Biden!” and its more modest counterpart, “Let’s Go Brandon!” in response to a seemingly nationwide distaste for the current Commander in Chief, due to hyper-inflation, a botched Afghanistan withdrawal, an unsecured southern border, and a supply-chain crisis.

In fact, “Let’s Go Brandon” has become such a popular, national sporting event chant that rapper Bryson Gray reached #1 on the iTunes charts with a musical version of the chant – despite being banned and censored by YouTube and Instagram. Continued Below

Trump and Melania also were seen taking part in the Atlanta Braves’ “tomahawk chop” moments before game time, as previously reported by The Freedom Times.

The “chop” has been a part of the team’s home games for about three decades, with fans echoing a chant as they rock their arms back and forth in a chopping motion, Sporting News reported.

Trump does the Tomahawk Chop at The World Series pic.twitter.com/CbtRAVybyB

Sen. McConnell: “Must Democrats Distaste For This President Dominate Every Thought That They Express & Every Decision They Make?”