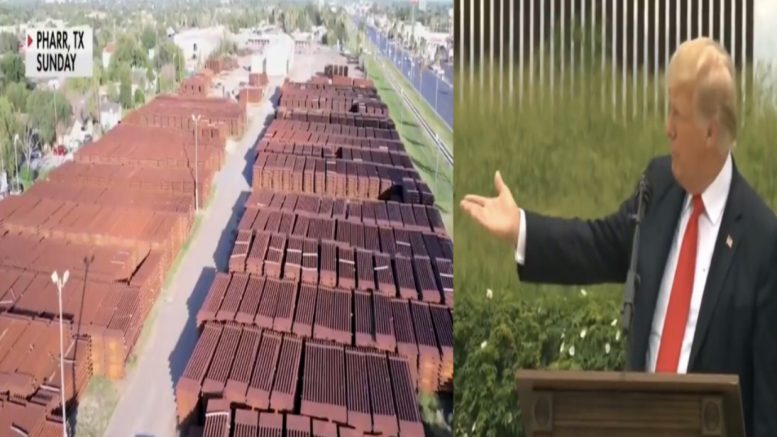 45th President Donald J. Trump issued a statement Tuesday via email from his “Save America” PAC blasting the Biden administration for their handling of the southern border and the cancellation of construction of the Border Wall.

Trump’s statement comes a day after 78-year-old Joe Biden has canceled more border wall construction, along with a number of Trump’s immigration policies, which has led to a massive surge of migrants flooding the U.S./Mexico border.

Our Border has gone from the safest and most secure in history, by far, to a broken, dirty, and disgusting wreck with thousands of unknown people from unknown countries, including from their now emptied prisons all over the world, unsustainably pouring in,” the former president said in his statement.

No country has ever seen anything like what is happening on the Southern Border of the United States—and no country is stupid enough to allow such a thing to happen. Crime will go up at levels that the U.S. has never seen before (it is actually already there), and terrorism will be the next big wave to lead the way.

Despite this, and incredibly, the very expensive and high-tech Border Wall, which has been 100% successful in areas where it was completed, is being lifted from installation points and moved to storage dumps where it will begin the process of rotting and rusting away. Putting it in place would have been far less expensive, and the Wall would have been quickly completed—there was very little left to do. Billions of dollars are being paid to contractors to NOT build the Wall, specifically, $6 million per day.

The “leaders” of our Country have gone crazy! Everything is falling apart, our Military is in shambles, the shelves of our stores are empty, COVID continues to rage at levels higher than last year, we have no oil, we have no courage, we have nothing. Our Country is a laughingstock all over the world, and is certainly no longer great, but we will Make America Great Again! Continued Below

More than a $100 million worth of taxpayer-paid border wall materials have been discarded and are going to waste in Texas after career politician Joe Biden ended construction of the Border Wall and canceled contracts for its construction.

A Fox News drone captured footage of around 10,000 steel panels — enough to build 100 miles of wall — which are rusting in the sun in Pharr, Texas, since January.

“I’m told there are about 10,000 of these wall panels just sitting here … each panel worth about $5,000. … Upwards of 50 million just sitting there going to absolute waste. Keep in mind, tax payers have already paid for this. It’s bought and paid for, and nothing is happening with it,” Bill Melugin, national correspondent for Fox News, reported. Video Below

(Related: WATCH: Al Sharpton Gets Shouted Down By Protestors In Del Rio: “We Don’t Want Your Racism In Texas. Get Out Of Here!”)