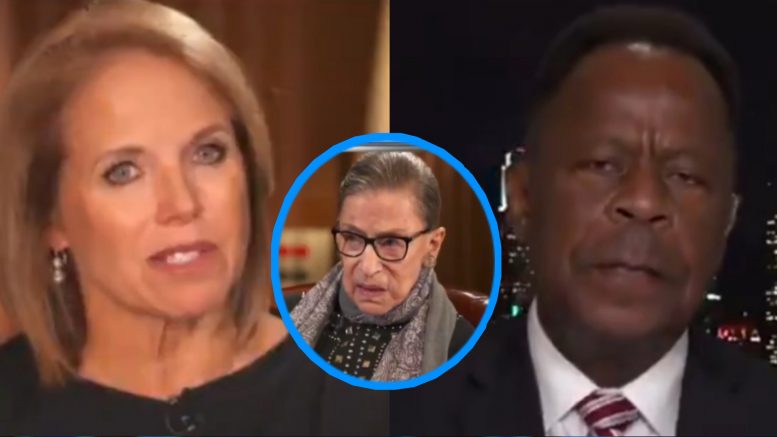 “Let’s be very clear. Katie Couric is not a lawyer, and she’s not a journalist,” Fox News contributor Leo Terrell declared while appearing on Saturday’s airing on Justice with Judge Jeanine.

Mr. Terrell was reacting to a new memoir released by Couric, the former co-host of NBC’s Today show, in which she admitted to purposely not airing comments made by former Supreme Court Justice Ruth Bader Ginsburg criticizing NFL players, such as Colin Kaepernick, kneeling during the national anthem because she supposedly “wanted to protect” RGB.

Related Article: Leo Terrell Explains Why Democrats Are ‘Afraid Of Black Conservatives More Than Any Other Group’

In her new memoir, Couric wrote she omitted some critical remarks Ginsburg made to her in 2016 about national anthem kneelers having “contempt for a government” that made it possible for their elders to have a “decent life.” Couric, who once anchored “Today” and “CBS Evening News,” also called herself a “big RBG fan” and guessed the then-83-year-old judge was too elderly and hadn’t properly heard her question.

Let me tell you what the problem was. Ruth Bader Gingsburg had the same opinion, the same distaste for kneeling as President Trump. Ruth Bader Ginsburg and Donald Trump agreed on the fact that kneeling was stupid. It was disrepectful and that cuts across all parties — Democrats and Republicans.

The problem with Katie is she’s in the far Left. She hates this country. That fringe group did not want Ruth Bader Ginsburg to agree with President Trump because most Americans, 99.9%, believe that that flag is respectful. It gives us what we love about this country. But to call Karie Couric a journalist is false. She’s not a lawyer and she had no clue. She was not protecting Ginsburg. She was protecting the far Left. Video Below

My all-star panel @TomiLahren and @TheLeoTerrell are back at it with reaction to the Durst sentencing and Katie Couric editing an interview with RBG, take a look: pic.twitter.com/tha31pfqKU

Leo Terrell Torches AOC’s Notion That There Is Not A ‘Surge’: “She Is A Menace To America”