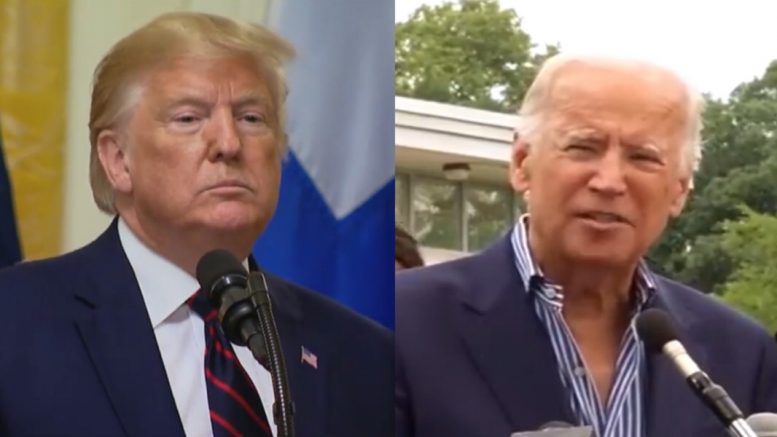 The internal “Twitter Files,” released on Friday, showed a back-and-forth debate within Twitter about the Hunter Biden laptop story and the ‘extraordinary steps’ to suppress the story in 2020. Twitter claimed it blocked the Hunter Biden story because of a company policy on hacked materials.

Emails from 2020 also revealed: “requests from connected actors to delete tweets were routine. One executive would write to another: ‘More to review from the Biden team.’ The reply would come back: ‘Handled'”.

8. By 2020, requests from connected actors to delete tweets were routine. One executive would write to another: “More to review from the Biden team.” The reply would come back: “Handled.” pic.twitter.com/mnv0YZI4af

Donald Trump reacted on Truth Social, wondering, “do you throw the Presidential Election Results of 2020 OUT and declare the RIGHTFUL WINNER, or do you have a NEW ELECTION?”

“So, with the revelation of MASSIVE & WIDESPREAD FRAUD & DECEPTION in working closely with Big Tech Companies, the DNC, & the Democrat Party, do you throw the Presidential Election Results of 2020 OUT and declare the RIGHTFUL WINNER, or do you have a NEW ELECTION? Trump asked on Saturday.

“A Massive Fraud of this type and magnitude allows for the termination of all rules, regulations, and articles, even those found in the Constitution. Our great ‘Founders’ did not want, and would not condone, False & Fraudulent Elections!” he wrote.

The 45th President also wrote on Truth Social Friday evening, “I am glad that everyone is now seeing the light on what I have been saying loud and clear for the last two years, that the 2020 Presidential Election was rigged and stolen by a combination of Democrats, Big Tech, ‘law enforcement,’ and other bad actors. Sadly, we have become a corrupt Country, perhaps one of the most corrupt anywhere in the world. We MUST right this horrible wrong, and take our Country back!”

Trump posted a video clip of him talking with Leslie Stahl of 60 Minutes, where she had claimed Hunter Biden’s laptop could not be verified.

“Wow! That’s a really big story about Twitter and various forms of government Fraud including, specifically, Election Fraud. The same level of Fraud took place with the other Big Tech companies, if not even worse (if that’s possible?),” Trump also wrote.

“We are living in a VERY CORRUPT COUNTRY &, AS THEY ARE SAYING ALL OVER THE INTERNET, ‘NOTHING WILL BE DONE ABOUT IT BECAUSE THE JUSTICE DEPARTMENT & FBI ARE TOTALLY CORRUPT.’ But they’ll keep investigating ‘boxes’ that were legally & openly taken from the W.H,” he said.

In another post on Saturday, the 45th President wrote, “‘Trump was right again!’ (On 2020 Election) Most used statement”.

Meanwhile, an FBI agent testified to Republican attorneys general this week that the FBI held weekly meetings with Big Tech companies in Silicon Valley ahead of the 2020 presidential election to discuss “disinformation” on social media and ask about efforts to censor that information.

On Tuesday, lawyers from the offices of Attorneys General Eric Schmitt of Missouri and Jeff Landry of Louisiana deposed FBI Supervisory Special Agent Elvis Chan as part of their lawsuit against the Biden administration. That suit accuses high-ranking government officials of working with giant social media companies “under the guise of combating misinformation” to achieve greater censorship, Brianna Herlihy at Fox News reported.

Trump called the move by the FBI “total corruption”.

“So now it is learned that the FBI, and others in conjunction with the ‘Justice’ Department, met with Big Tech companies to bend them into saying bad things about ‘Trump’ and Republicans in order to RIG & STEAL the 2020 Presidential Election, which was a Scam and a Fraud. Now additional evidence, different but just as illegal and sinister as the many other forms of cheating used, is flowing out of the crevices of this corrupt wound. This is big ‘stuff.’ DO SOMETHING as our Country Melts!!!” he wrote.

Trump added: “What the FBI did with harassing, cajoling, and intimidating Big Tech companies into corrupting the 2020 Presidential Vote to the side of the Radical Left is no different in meaning than STUFFING THE BALLOT BOXES, only far more sophisticated and impactful. This is a major and very serious violation of the law, yet they come after me for what virtually every other President has done, and is allowed to do by law, probably as a means of complicating and covering up their massive Election Crime!!!”