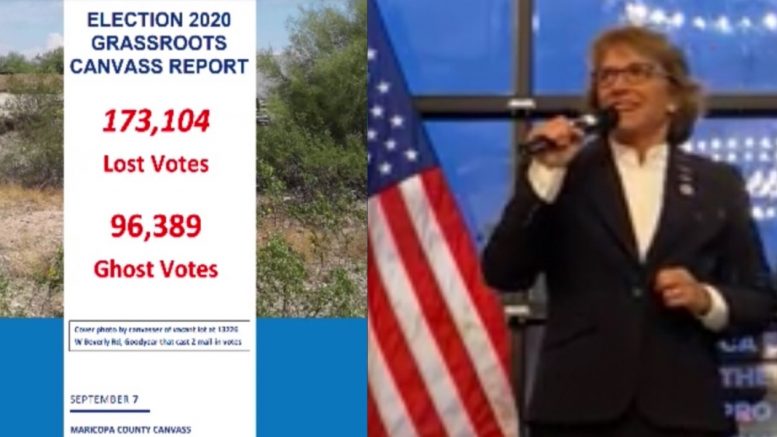 Liz Harris, a Republican grassroots organizer, spoke to host Steve Bannon on “War Room” Wednesday, disclosing voting discrepancies in Maricopa County, which was conducted through canvasing. She released a report of the audit on Tuesday.

“Additionally an estimated 96,389 mail-in votes were cast under the names of registered voters who were either unknown to the residents of the registration address or who were verified as having moved away prior to October 2020”, the report states.

Former US military intelligence officer and statistical analyst Seth Keshel, who released a report last month over the 2020 election, presented graphs during “War Room” on Wednesday, explaining why it “was too close to certify Maricopa County”, regarding not just the presidential election, but U.S. Senate, representatives, and more.

Meanwhile, Liz Harris, during the interview, told Steve Bannon of the canvass report, “We actually went to the homes of the registered voters and the results are just amazing.”

She further noted, “We don’t take money and we are a grassroots citizens group that essentially got this started.” Continued Below

Following the release of the canvass report, State Senator Wendy Rogers (R) reacted in series of tweets, highlighting the results of the independent canvas, calling for decertification.

Here are the slides from the @SKeshel analysis he is going over on Steve Bannon's War Room right now. Tune in: https://t.co/5x5OPPVwg6 pic.twitter.com/TJe1UbMCQK

We need FORENSIC AUDITS, CANVASSES, ARRESTS, and LEGISLATION. Gotta have all four to preserve our elections or we don't have a country.

Stats from the canvass sent to me by @SKeshel

*canvassed two precincts fully & large sections of precincts throughout the county. Interviewed more voters than 75% of towns/cities in America have residents. Sample falls within 95% scientific accuracy for extrapolations. (1/5)

2) Ghost (Phantom) votes – non-existent voters with votes recorded – 96,389 – 1 out of 20 interviewed identified at least one phantom voter registered to their address.

CONCLUSION: ELECTION IN MARICOPA MUST BE DECERTIFIED (5/5)

Do we need any more evidence to finally recall the electors and decertify the election? Preliminary audit results & a private canvass. More evidence is coming but I already have seen enough. History will judge us well when we finally get 2020 right. #Decertify

Never forget that @FoxNews and @BretBaier called Arizona for Biden before even a sliver of the votes were even counted.

Will someone please make me a map or meme that combines the findings in Arizona from @SKeshel, @MattBraynard, @LizHarrisMBA, @UAmerica333, @Rasmussen_Poll, Mike Lindell, & any others who have released analysis on the Arizona election? All of these sources have similar findings.

(Related: Sec. of State Hobbs: No GOP Candidate for Governor Acknowledges Biden Won AZ; Wendy Rogers Responds: ‘Does Someone Want to Tell Her?’)

Elon Musk to ‘Independent-Minded Voters’: ‘I Recommend Voting for a Republican Congress’