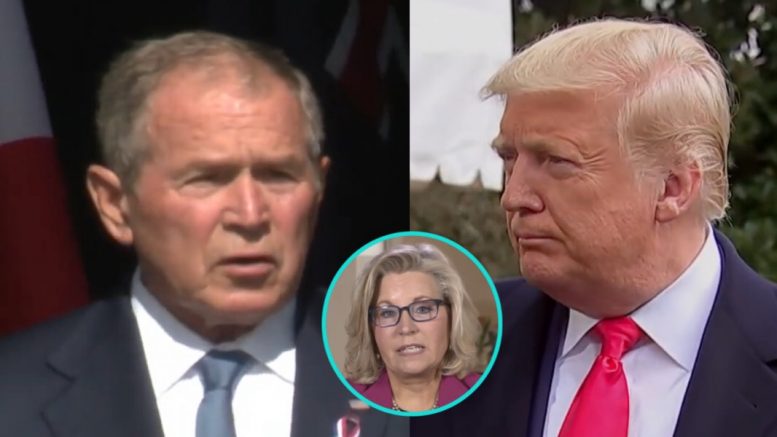 45th President Donald J. Trump issued a statement on Wednesday via email from his “Save America” PAC, criticizing former President George W. Bush and Karl Rove after it was revealed that the pair would headline a Texas fundraiser for Rep. Liz Cheney (R-WY) next month.

The fundraiser for Cheney, whose father, Dick Cheney, served as vice president in the two-term Bush administration, will be held on Oct. 18 and guests will include Karl Rove, Bush’s longtime political adviser, and former Texas Republican Sen. Kay Bailey Hutchison, who was Trump’s ambassador to NATO, New York Post reported.

Bush is the one who got us into the quicksand of the Middle East and, after spending trillions of dollars and killing nearly a million people, the Middle East was left in worse shape after 21 years than it was when he started his stupidity. It ended with Biden’s most embarrassing in history withdrawal from Afghanistan, a total surrender, leaving $85 Billion dollars of equipment and many young Warriors lives behind.

Bush is the person who did not have the courage to give a pardon to his Vice President’s Chief of Staff, Scooter Libby, even though Cheney begged for him to do so. He wouldn’t, they didn’t talk for years.

I didn’t know Scooter, but gave him a full pardon—not at their request, but because he deserved it. He suffered greatly. Former Vice President Cheney called to effusively thank me. Now he is on the side of his daughter who is so bad for Wyoming and the United States that she is polling at record lows. Continued Below

Trump is backing her challenger Harriet Hageman in the 2022 Republican primary for Wyoming’s sole House seat. “I strongly endorse Republican House of Representatives Candidate Harriet Hageman from Wyoming who is running against warmonger and disloyal Republican, Liz Cheney,” he said, in part, earlier this month.

Last week, Trump lashed out at Bush after he appeared to reference the Capitol protest in a speech during a memorial ceremony near Shanksville, Pennsylvania marking the 20th anniversary of the 9/11 attacks.

She grew up in Virginia & lives in the swamp.

Liz doesn't represent Wyoming, she represents DC elites. So no wonder she's spending her time raising money outside of Wyoming with people who hate our conservative values! https://t.co/1nJn3rxpLh

(Related: Trump Lashes Out At Former President Bush Over His Remarks On Domestic Extremists)

45 Announces His ‘Complete & Total Endorsement’ For Sen. Rand Paul: “He Fights Against The Swamp In Washington”