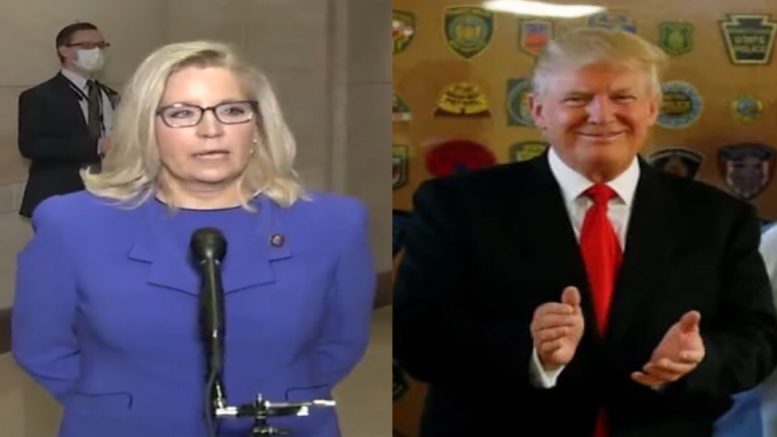 The 45th President issued a statement Wednesday morning via “From the Desk of Donald Trump”, celebrating the news over House Republicans removing Rep. Liz Cheney (R-WY) from her leadership role as the House Republican Conference chair, the third-highest position as a House Republican.

Cheney had remained steadfast in her opposition to former President Donald Trump and his “dangerous lies” about the 2020 election being stolen from him — putting her at odds with other House Republicans who wanted to move on from the Jan. 6 riot and unite the party to win in the 2022 midterms, Fox News reported.

Liz Cheney is a bitter, horrible human being. I watched her yesterday and realized how bad she is for the Republican Party. She has no personality or anything good having to do with politics or our Country.

She is a talking point for Democrats, whether that means the Border, the gas lines, inflation, or destroying our economy. She is a warmonger whose family stupidly pushed us into the never-ending Middle East Disaster, draining our wealth and depleting our Great Military, the worst decision in our Country’s history.

I look forward to soon watching her as a Paid Contributor on CNN or MSDNC! Continued Below

Liz Cheney took the House floor Tuesday to defend her repeated unprompted criticism of the 45th President ahead of Wednesday morning’s voice vote.

“I will not sit back and watch in silence while others lead our party down a path that abandons the rule of law and joins the former president’s crusade to undermine our democracy,” she had said, in part.

Earlier on Wednesday, former President Donald Trump urged Republicans to remove Cheney, calling her a “poor leader, a major Democrat talking point, a warmonger, and a person with absolutely no personality or heart.” Continued Below

The Republicans in the House of Representatives have a great opportunity today to rid themselves of a poor leader, a major Democrat talking point, a warmonger, and a person with absolutely no personality or heart. As a representative of the Great State of Wyoming, Liz Cheney is bad for our Country and bad for herself. Almost everyone in the Republican Party, including 90% of Wyoming, looks forward to her ouster—and that includes me!

Arriving on Capitol Hill on Wednesday morning, Cheney, however, vowed to continue leading the party away from former President Donald Trump. “I will do everything I can to ensure that the former president never again gets anywhere near the Oval Office,” Cheney told reporters.

An election on who will replace Cheney will occur at a later date. Rep. Elise Stefanik (R-NY) is the front runner and has the endorsement of former President Donald Trump along with the top two House Republican leaders: Reps. Kevin McCarthy (R-CA) and Steve Scalise (R-LA). 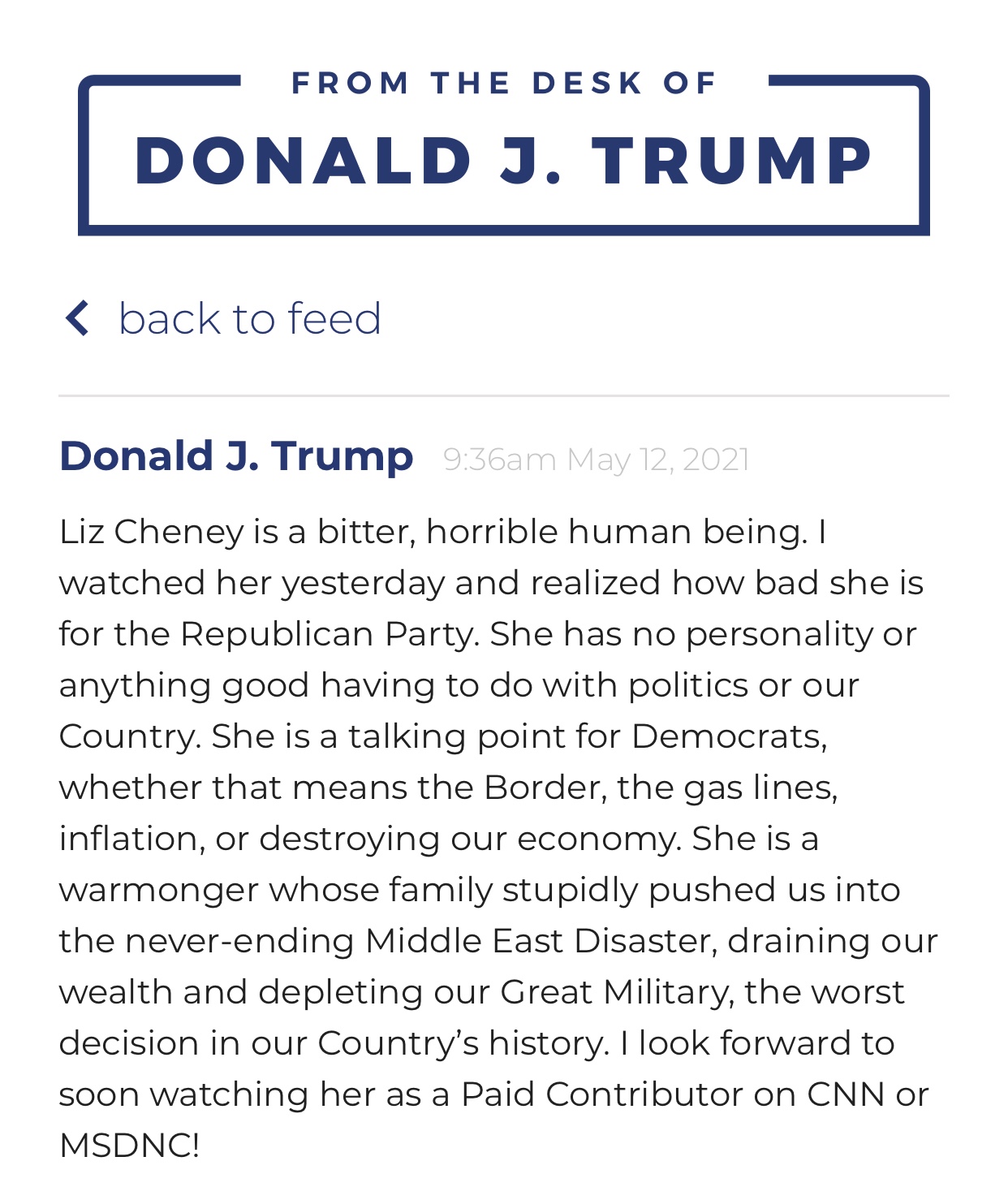 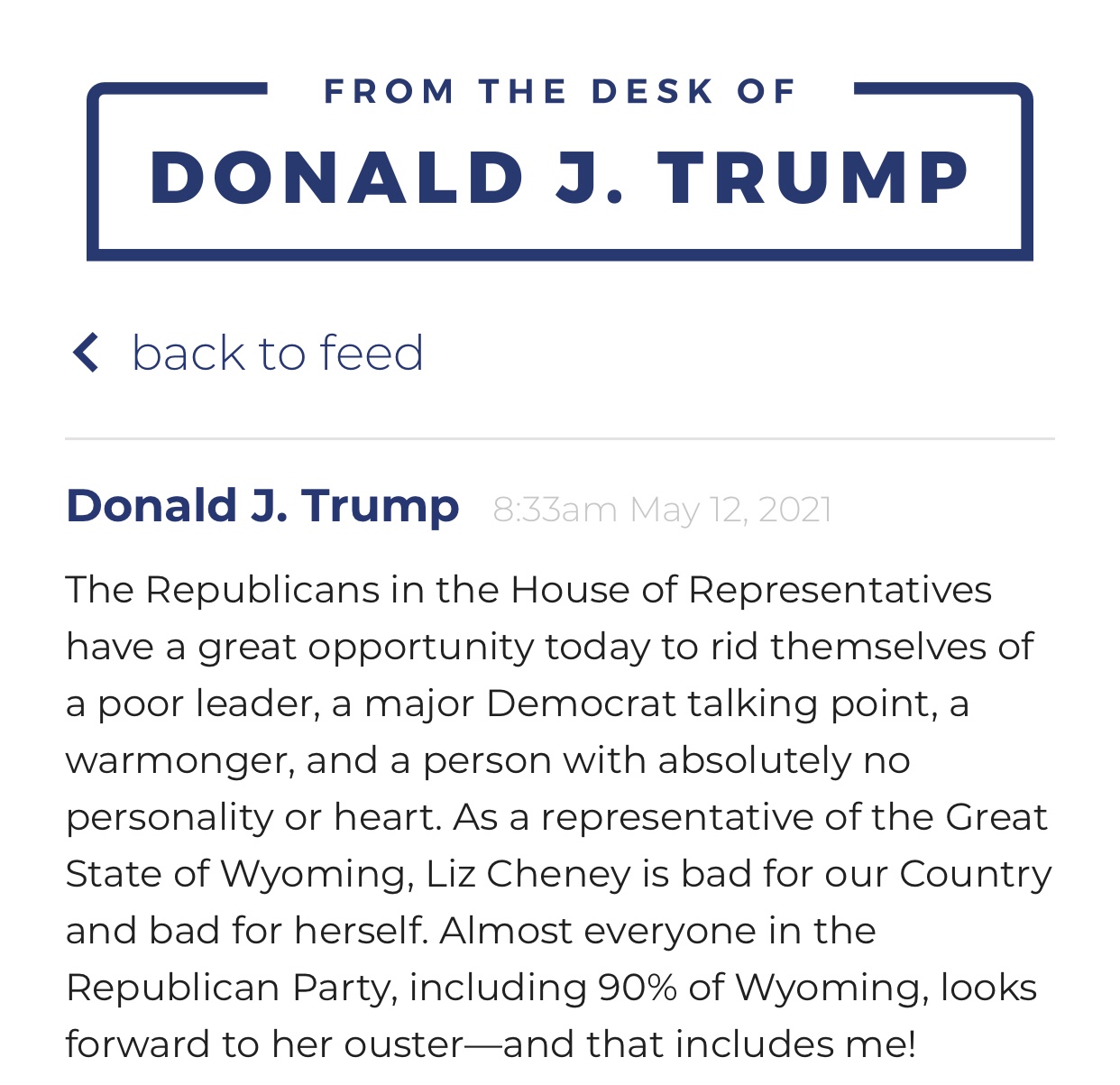 Trump: “There’s A Reason That Joe Biden Can’t Walk Into A Sports Stadium Anywhere In America Without Being Loudly Mocked & Ridiculed”