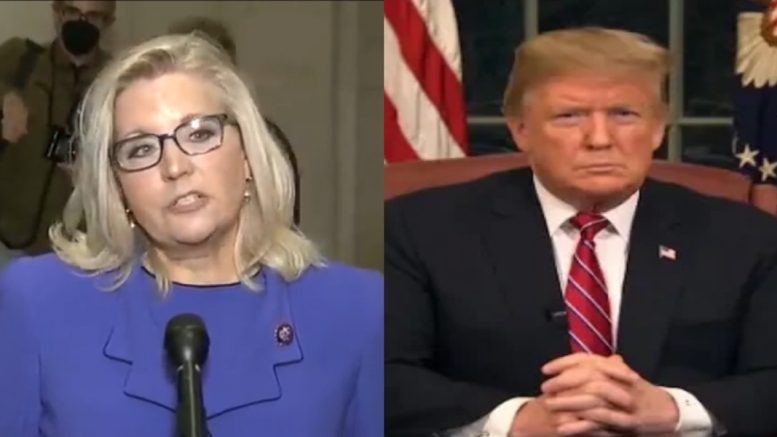 45th President Donald J. Trump issued a statement Thursday via email from his “Save America” PAC announcing his “Complete and Total Endorsement” for former Wyoming national GOP committeewoman Harriet Hageman, who is running against –according to Trump — “warmonger and disloyal Republican” Liz Cheney (R-WY).

Trump has made Cheney — one of the 10 House Republicans who voted in favor of impeaching him following the Jan. 6 [protest] at the Capitol — one of his top targets in the 2022 election cycle, repeatedly accusing her of being a “RINO” and blasting her for partaking in the Jan. 6 select committee, New York Post reported.

I strongly endorse Republican House of Representatives Candidate Harriet Hageman from Wyoming who is running against warmonger and disloyal Republican, Liz Cheney. Harriet is a fourth-generation daughter of Wyoming, a very successful attorney, and has the support and respect of a truly great U.S. Senator, Wyoming’s own Cynthia Lummis.

Harriet Hageman adores the Great State of Wyoming, is strong on Crime and Borders, powerfully supports the Second Amendment, loves our Military and our Vets, and will fight for Election Integrity and Energy Independence (which Biden has already given up).

Unlike RINO Liz Cheney, Harriet is all in for America First.

Harriet has my Complete and Total Endorsement in replacing the Democrats number one provider of sound bites, Liz Cheney. Make America Great Again! Continued Below

Hageman stepped down from her post as the state’s national Republican committeewoman on Tuesday.

While Cheney has come under fire from members of her conference, she dismissed her primary opponent and responded back the 45th President’s endorsement of Hageman.

“Here’s a sound bite for you: Bring it,” Cheney tweeted shortly after Trump’s announcement. Continued Below

Here’s a sound bite for you: Bring it. pic.twitter.com/VmET1JUs12

In addition to her tweet, Cheney issued an email statement:

I am honored to represent the people of Wyoming and proud of my strong conservative record. I look forward to an extended public debate about the importance of the rule of law and the solemn duty of elected officials to uphold their oath to the Constitution.

It is tragic that some in this race have sacrificed those principles, and their duty to the people of Wyoming, out of fear and in favor of loyalty to a former president who deliberately misled the American people about the 2020 election, provoked an attack on the U.S. Capitol, and failed to perform his duties as president as the violence ensued.

Cheney was ousted from her leadership position as House Republican Conference chair by her GOP colleagues over her frequent criticisms of Trump earlier this year, with Trump-ally Rep. Elise Stefanik (R-NY) succeeding her in the role. Continued Below

I am proud to have the full Endorsement of President Trump! Join our Team today and let's take back this seat for the People of Wyoming! >> https://t.co/wpp3ydCIwR pic.twitter.com/AZdtnE4KT0

Planning on it. If you’re not busy meeting with Pelosi come back and visit us in Wyoming sometime. https://t.co/5uwytefnAR https://t.co/7zg45yjHab

I’m running for Congress because I am a Deep-Rooted Wyomingite who is sick of being misrepresented in Washington. We need a Tough Conservative to stand up against Nancy Pelosi, not help her divide Republicans. Join me>>> https://t.co/oFpYOMCZHi

Hageman has scheduled a news conference for 4 p.m. today at Little America Hotel and Resort to formally announce her campaign. In a news release announcing that event, Hageman said she stepped down as a Republican National Committeewoman from Wyoming this week in order to take on is Cheney, who has angered Wyoming voters and was censured by the Wyoming Republican Party earlier this year, largely for her support of the impeachment of President Trump, according to Wyoming Business Report.