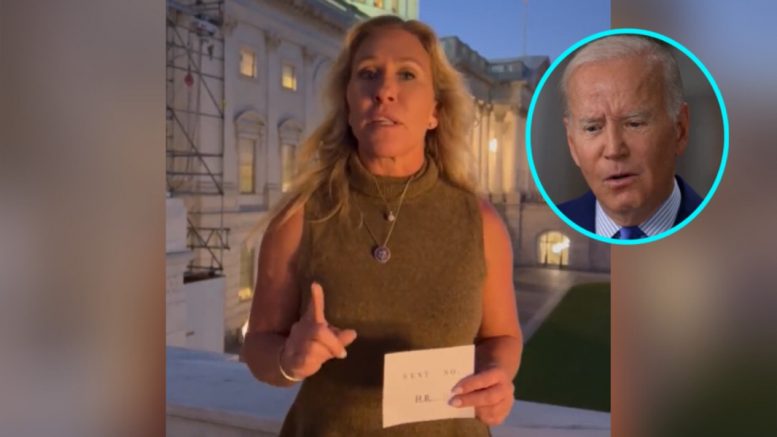 Rep. Marjorie Taylor Greene (R-GA) announced on Monday that she has formally filed Articles of Impeachment against Joe Biden for “selling the American people’s oil to our enemies” and predicted the sell of the strategic reserves will “create a national security crisis”.

More than 5 million barrels of oil that were part of a historic U.S. emergency oil reserves release aimed at lowering domestic fuel prices were exported to Europe and Asia, according to data and sources, even as U.S. gasoline and diesel prices touched record highs, Arathy Somasekhar at Reuters reported in July.

“Joe Biden is selling our strategic petroleum reserves. This should never happen,” Congresswoman Greene said in a video clip posted on her Twitter account. “He is draining our reserves and selling our oil, American’s oil to foreign countries, and China is a top buyer. China is an enemy. They are not our friend.”

Rep. Greene explained that the strategic petroleum reserve is supposed to be used as an “emergency supply for if something goes wrong in this country” and reported that the reserves are “down to 434 million barrels of oil”.

“That is nearly half of what it was when President Trump left office. This is an outrage. This is completely wrong and no president of the United States should be doing this to the American people. It’s going to create an national emergency crisis, and that is exactly what President Joe Biden is doing,” she said.

“Impeach Joe Biden”, she concluded while holding a note card that read H.R. 1632, the Articles of Impeachment she filed against Biden.

No President should be selling the American people’s oil to our enemies.

Joe Biden is creating a national security crisis and a national energy emergency.

Rep. Greene told Fox News’ Tucker Carlson and viewers on Friday her intent to file the Articles of Impeachment against the Democrat career politician.

Joe Biden is draining our Strategic Petroleum Reserve and selling it to our enemies.

On Monday, I’m introducing articles of impeachment to hold him accountable. #ImpeachBiden pic.twitter.com/Mnm18iYuSg

Previously, Rep. Greene introduced three impeachment resolutions against Biden in August 2021, “for his dereliction of duty in Afghanistan, his violations of immigration law causing a national security crisis on our Southern border, and his usurping of Congressional power by ignoring the SCOTUS”, as reported by Swamp Drain.

In January of last year, she also filed Articles of Impeachment against Biden “for abuse of power” because “Joe Biden is on record for abusing his office and abusing the positions he holds”, she said.

White House Deflects After Biden Appears to Look for Deceased Congresswoman in Crowd: ‘She was of top of Mind’