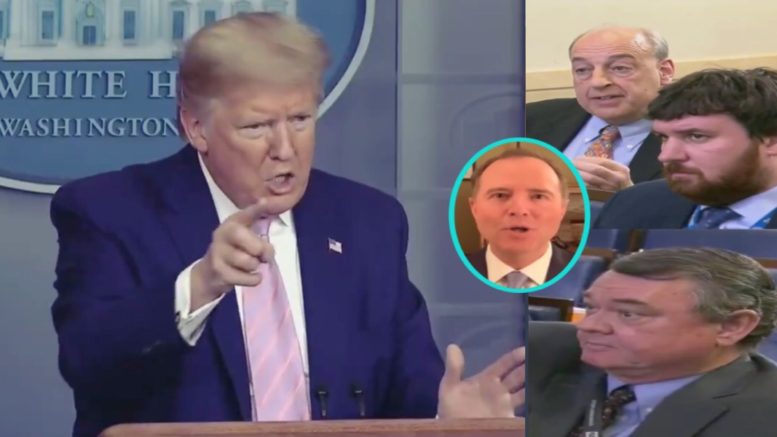 The Commander in Chief on Friday notified both the Senate and House intelligence committees in a letter that he is booting intelligence community inspector general Michael Atkinson, effective in 30 days.

In letters to lawmakers after receiving the complaint in August, Atkinson said he believed the complaint was “urgent” and “credible.” But the acting director of national intelligence at the time, Joseph Maguire, said he did not believe it met the definition of “urgent.”

During Saturday’s White House Coronavirus Task Force briefing, a reporter asked about the firing of Atkinson.

“I thought he did a terrible job”, the Commander in Chief immediately responded. “Absolutely terrible.”

“He took a whistleblower report, which turned out to be a fake report– it was fake. It was totally wrong. It was about my conversation with the president of Ukraine. He took a fake report and he brought it to Congress with an emergency. Okay? Not a big Trump fan I can tell you,” the president explained.

“Instead of saying, and we offered this to him, no, no, we will take the conversation– where fortunately we had the transcript– if we didn’t have a transcript with the kind of deception and dishonesty that were practiced by the Democrats, I might not be standing here right now. Okay? Fortunately, we had a transcript, and it was a perfect transcript. Because even the Lt. Col. [Vindman], admitted it was correct,” he said. Continued Below

“So we offered this IG– I don’t know him, I don’t think I’ve ever met him. He never even came in to see me. How can you do that without seeing the person?” President Trump wondered. “He never came in to see me, never requested to see me. He took this terrible, inaccurate whistleblower report and he brought it to Congress. We offered to have him see my exact conversation… And then after he saw it, he must’ve said ‘Wow’. Because as I’ve said it many times and it drives you people crazy, it was a perfect conversation.” Continued Below

“And over that, with 196 to nothing, voted by the Republicans. … Dishonest Democrats impeached a President of the United States. That man is a disgrace to IG’s. He’s a total disgrace,” President Trump added.

Asked if he ran by his decision to dismiss Michael Atkinson, President Trump immediately replied: “That’s my decision. I have the absolute right. Even the fake news last night said, ‘He has the absolute right to do it’. But ask him: why didn’t you go and see the actual conversation? There was no rush. … He even said it was politically biased. He actually said that.”

“You know who the whistleblower is,” Trump then said, as he pointed at a reporter. “And so do you. And so does everyone in this room and so do I. Everybody knows. But they give this whistleblower status that he doesn’t deserve. He’s a fake whistleblower. And frankly, somebody ought to sue his ass off.” [Emphasis added.]