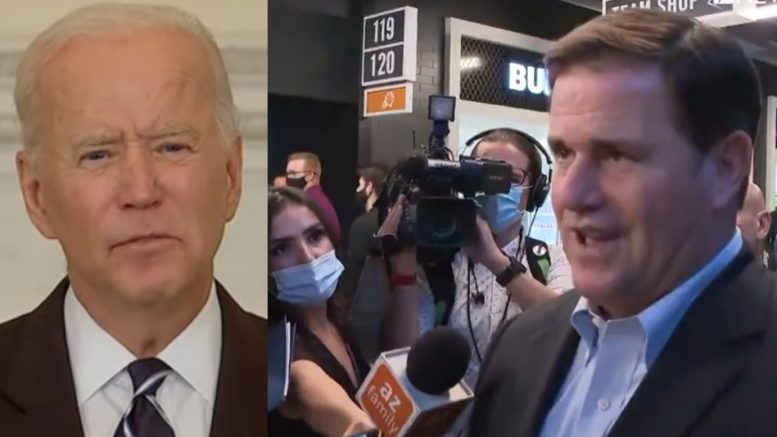 As reported by CBS News, “President Biden announced the most sweeping COVID-19 vaccine requirements yet on Thursday, which will affect roughly 100 million Americans. The new measures include a vaccine mandate for all federal workers and contractors, and a requirement that large companies [with greater than 100 employees] must mandate vaccines or regular testing for employees.”

At one point, Biden appeared to threaten governors who he believes are not enforcing strict COVID-19 protocols.

“If these governors won’t help us beat the pandemic, I’ll use my power as president to get them out of the way,” Biden said.

In response, Gov. Doug Ducey signaled “pushback” is underway from the state of Arizona against the “government overreach” that is being exhibited by the Biden Administration.

The governor went on to declare that governors “don’t report to Joe Biden” or “the federal government.”

I have been supportive of the vaccine. I pushed the vaccine. I’ve been publicly vaccinated. That was my choice. What the Biden administration is government overreach pure and simple. And people don’t want them hammering down on them to get this vaccine.

… This is not the powers vested to the federal government. And this is just a further politicization of this virus. It’s unnecessary and it’s unneeded. We need more people to get vaccinated and this is not the way to get it done.

This dictatorial approach is wrong, un-American and will do far more harm than good. How many workers will be displaced? How many kids kept out of classrooms? How many businesses fined? The vaccine is and should be a choice. We must and will push back. 2/2

Arizona state Sen. Wendy Rogers was among one of the first lawmakers from the Grand Canyon State to stand behind Gov. Ducey’s resistance to Biden’s controversial new mandates.

We leave you with her response:

I stand with Governor @dougducey as he defends our rights against @JoeBiden's power grab. Happy to help in any way I can with legislation or generating support to defend Arizona. #DefendArizona

Chris Christie: Kamala Harris ‘Started The Politicization of These’ Jabs Back in 2020