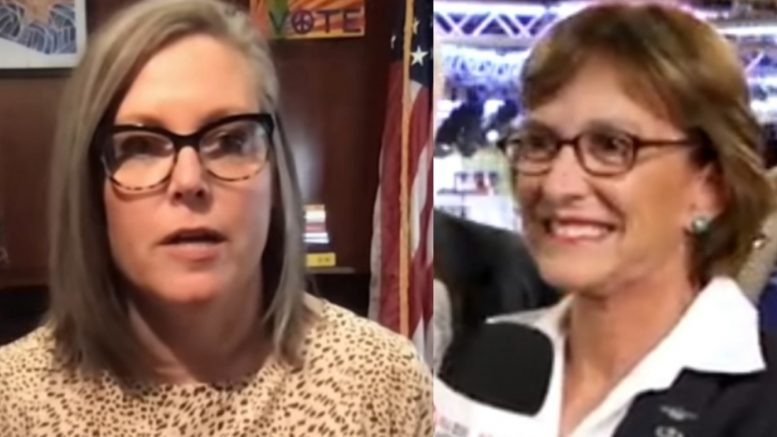 Arizona state Senator Wendy Rogers (R) sent a bold message to Arizona’s Secretary of State Katie Hobbs (D) on Wednesday after Hobbs tweeted about her future ambitions if she is elected as the next governor of the Grand Canyon State.

Hobbs — who is running as a Democrat in Arizona’s 2022 gubernatorial contest — tweeted, “Arizona is a powerhouse in the green economy. As Governor, I’ll prioritize investment in green jobs that grow our economy, protect our environment, and form the backbone of an Arizona that works for all of us.”

In response, Sen. Rogers wrote, “You will not be governor. You are going to the SLAMMER.”

You will not be governor. You are going to the SLAMMER. https://t.co/TKQhCNlVVA

Sen. Rogers’ message to Hobbs came just hours after bombshell findings from a grassroots canvassing effort were made public, which indicate 299,493 votes cast in Arizona’s 2020 election were either lost, ghost or inaccurate votes.

The state senator called out the media for continuing to “cherry pick” information, while ignoring “the thousands, tens of thousands, and hundreds of thousands of discrepancies.”

I feel like the Soros-funded data #FakeNews folks cherry-pick one or two minor things to shoot holes in critical analysis questioning the 2020 election but ignore the thousands, tens of thousands, and hundreds of thousands of discrepancies. Does anyone else see that?🤷‍♀️

Sen. Rogers went on to bash Hobbs after pictures surfaced of a campaign event that she held earlier on Wednesday. Sen. Rogers compared the event to a “Biden rally” and suggested Hobbs is about to “rig another” election.

Looks like a Biden rally with the circles. Quick, grab the Zucky drop boxes, the fraud machines, and the Chinese ballots. Katie needs to rig another one! https://t.co/OIDHmUigAB

Rogers capped off Wednesday in dramatic fashion as she appeared to drop a hint of what to expect when the results of Maricopa County’s full forensic audit are made public.

“We have the numbers and we have the truth. They have the money through the Fed and the fraud. In the end, people and truth win,”

We have the numbers and we have the truth. They have the money through the Fed and the fraud. In the end, people and truth win.