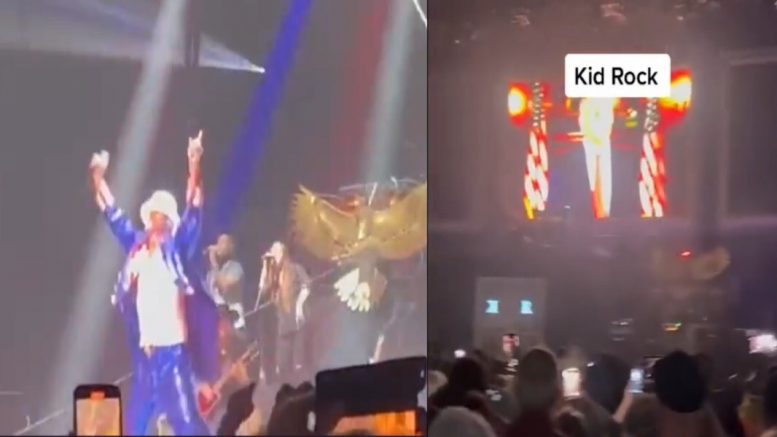 Kid Rock kicked off his 2022 national tour with a video introduction from pal and former president Donald Trump. Before the “All Summer Long” singer took to the stage at the Ford Center in Evansville, Indiana Wednesday night, Rock played a video message from the 45th President, New York Post reported.

In a pre-recorded video, Trump addressed the crowd at the event, calling them “the true backbone of our great country” and “hardworking, God-fearing, rock-and-roll patriots.”

“Let’s all continue to love one another, fight for our God-given freedoms, and most of all, let’s make America rock again,” the 45th President said before putting on a red MAGA-style hat that read: “Make America Rock Again.”

As soon as the 45th President finished his message to attendees at the concert, the stage lights went on and Kid Rock opened up with “We The People” — which bashes Joe Biden and Dr. Anthony Fauci over vaccine mandates and other policies — off his new album “Bad Reputation.”

Rock has been a vocal supporter of Trump, having visited him at the White House in 2017 and golfed with the president on various occasions, Billboard reported. Continued Below

During an appearance on Fox News’ “Tucker Carlson Tonight” last month, Kid Rock explained his support for President Trump, saying: “… How sharp he is, it’s incredible. And you can see now if you watch a Joe Biden interview and you watch a Trump interview … there’s no comparison.”

Wallace Insinuates Trump Made Racist Remarks At Cummings, Mulvaney Fires Back: ‘You’re Spending Way Too Much Time Reading Between The Lines’

Doocy to Jean-Pierre: ‘Why is There a Voicemail of [Biden] Talking to his son About his Overseas Business Dealings?’