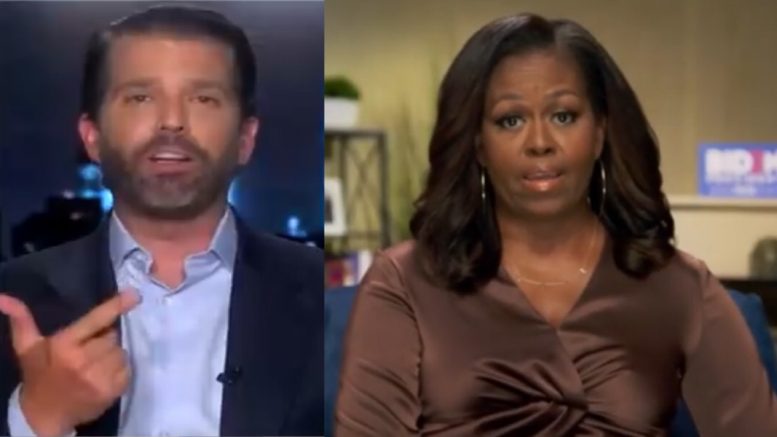 During her speech at the virtual Democratic National Convention, former first lady Michelle Obama condemned President Trump for the widely used accusation of separating children from their parents at the Southern Border and locking them in “cages.”

That policy, however, was created under Barack Hussein Obama’s presidency and stopped during the Trump Administration.

Michelle Obama said during her pre-recorded speech: “They watch in horror as children are torn from their families and thrown into cages.”

What she did not say is that the very same “cages” were built and used in her husband’s administration, for the same purpose of holding migrant kids temporarily, according to AP fact check.

The reference to cages is misleading and a matter that Democrats have persistently distorted, AP reported.

At the height of the controversy over Trump’s zero-tolerance policy at the border, photos that circulated online of children in the enclosures generated great anger. But those photos — by The Associated Press — were taken in 2014 and depicted some of the thousands of unaccompanied children held by President Barack Obama. When that fact came to light, some Democrats and activists who had tweeted the photos deleted their tweets. But prominent Democrats have continued to cite cages for children as a distinctive cruelty of Trump, per AP. Continued Below

(Related: Trump Fires Back At Michelle Obama’s DNC Pre-Recorded Speech: “[I] Would Not Be Here… If It Weren’t For The Job Done By Your Husband”)

The Obama administration separated migrant children from families under certain limited circumstances, like when the child’s safety appeared at risk or when the parent had a serious criminal history. But family separations as a matter of routine came about because of Trump’s “zero tolerance” enforcement policy, which he eventually suspended because of the uproar, as reported by AP.

Users on Twitter responded by announcing that Michelle Obama was “caught lying” in her pre-recorded speech for the DNC Convention. Video Below

"They watch in horror as children are torn from their families and thrown in cages." pic.twitter.com/sU3cAO3kyv

Obama AP FACT CHECK: “What she did not say is that the very same ‘cages’ were built and used in her husband’s administration, for the same purpose of holding migrant kids temporarily.” https://t.co/OYxNyaTNcM

Michelle Obama boldly lied last night. She decried “kids in cages,” 1) ignoring they are the very structures the Obama admin put in place, & 2) falsely claiming these are “cages” rather than dividers specifically designed for air flow & visibility to keep kids safe.

Facts are important. The fact that Democrats continue to lie about the detention of migrants at the southern border shows how blinded they are by their hatred of President Trump. https://t.co/tkIIDbkQmt