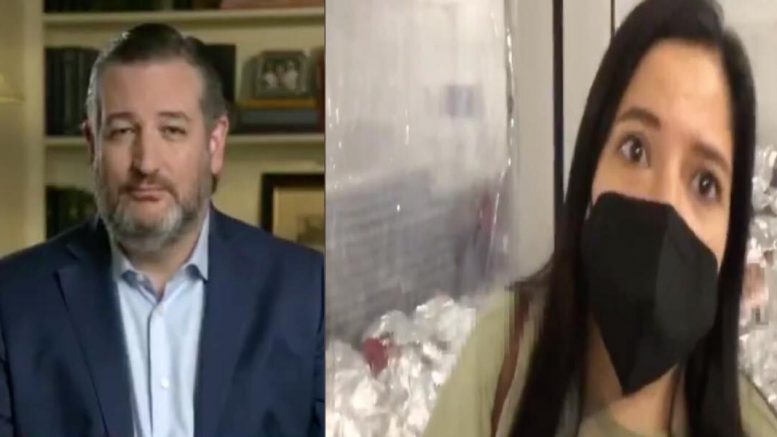 Eighteen Republican senators, led by Senators Ted Cruz (TX) and John Cornyn (TX), visited the southern border in Texas on Friday to observe and document the current conditions for the American people as the Biden administration is struggling to handle the surge of unaccompanied migrant children and illegal aliens seeking entry to the U.S., as previously reported by The Freedom Times.

On Sunday, Senator Cruz released never before seen video footage from inside the Donna facility in Texas, which is holding several migrants. The video shows a Biden official, who was sent there according to Cruz, from Washington, D.C., to try to prevent the GOP lawmakers from filming and taking pictures on their own.

“So you work for the commissioner? You’re a senior advisor. You were hired two weeks ago, and you were instructed to ask us to not have any pictures taken here, because the political leadership at DHS does not want the American people to know it,” Senator Cruz told the woman who was trying to prevent the lawmakers from documenting.

“You keep standing in front of the pictures. So you don’t want pictures taken? The rules are arbitrary, and they’re designed to keep the American people in the dark,” he told the Biden official.

The Biden operative then told Senator Cruz, “It’s not a zoo, sir.”

“You’re right, and this is a dangerous place. And your policies are, unfortunately, trying to hide them. I understand you are instructed– when 18 Senators came down here– I respect them and I want to fix this situation. The administration you are working for is responsible for these conditions,” the Texas senator informed the official.

“I ask you to respect the people as well. This is not respect,” he told her as she kept preventing Mr. Cruz from documenting the Biden administration’s immigration crisis. Video Below

Senator Ted Cruz tweeted the video and wondered, “How far is Joe Biden going to stop the American people from seeing inside the Donna CBP facility?”

“Biden sent a political operative from DC to block our cameras and even threatened another senator to obstruct legitimate congressional oversight,” he said.

How far is Joe Biden going to stop the American people from seeing inside the Donna CBP facility?

Biden sent a political operative from DC to block our cameras and even threatened another senator to obstruct legitimate congressional oversight. pic.twitter.com/vHT2U7Nh1z

Due to President Biden’s policies, the situation on the border is the worst I’ve ever seen.

The Donna, Texas facility is at 1,500% capacity and kids are locked in cages side by side. pic.twitter.com/yrDOwV3yxd

(Related: Sen. Cruz Posts Video Footage Showing ‘Cages’ That Migrants Are Being Kept In Near The Border)