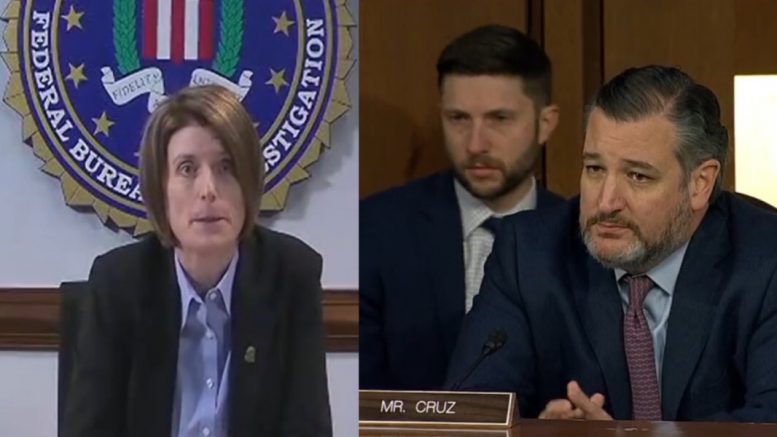 Executive assistant director for the FBI’s national security branch, Jill Sanborn, would not confirm nor deny anything on Tuesday when Senator Ted Cruz (R-TX) grilled her over whether or not FBI agents or confidential informants played a role in the Capitol protest on January 6, 2021.

During a Senate Judiciary Committee hearing titled, “The Domestic Terrorism Threat One Year After January 6,” Mr. Cruz asked Jill Sanborn about suspicions held by some that government officials encouraged lawless behavior before and during the protest.

“How many FBI agents or confidential informants actively participated in the events of Jan. 6?” Senator Ted Cruz asked Jill Sanborn.

In response, Sanborn claimed that she could not discuss “the specifics of sources and methods” of the FBI.

The Texas Senator broadened his question by asking if any FBI agents or confidential informants actively participated in the riot.

“Sir, I can’t answer that,” Sanborn alleged. Continued Below

Senator Cruz also brought up Ray Epps, who was seen on video the day before the protest, telling a crowd, “Tomorrow, we need to get into the Capitol! Into the Capitol!” The crowd reacted by shouting, “Fed! Fed! Fed!” at Epps.

“Sir, I cannot answer that question,” Sanborn said. Continued Below

.@SenTedCruz: "Did any FBI agents or confidential informants actively participate in the events of January 6th? Yes or no?"

How many January 6th protesters were actually working for the federal government? In October, I asked AG Garland while he was under oath and he refused to answer. He looked very nervous and worried when I showed him this video in that hearing.pic.twitter.com/lvd9n4mMHK

And he followed up with this article. Video evidence shows these people organizing and encouraging the breach of the Capitol. Why haven’t they been indicted? What gave them the confidence to operate with impunity? Did they have get-out-of-jail-free cards? https://t.co/DJK9HacE6m