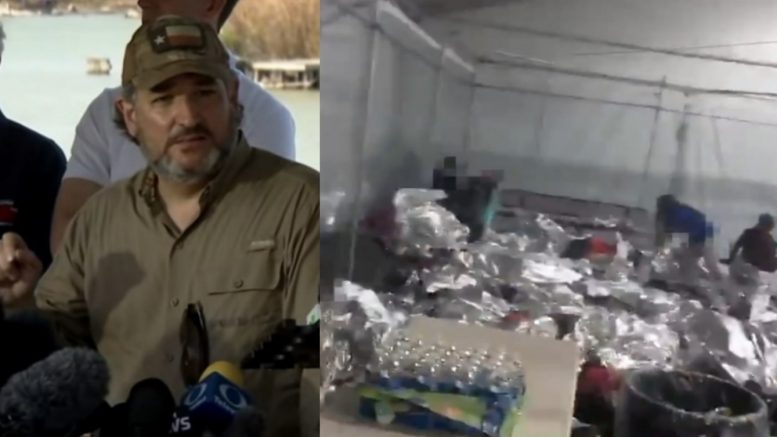 Senator Ted Cruz posted exclusive video footage taken inside border control facilities showing “cages” that migrants are being kept inside after being apprehended for illegally crossing into the United States.

The video was uploaded to social media on Friday just hours after eighteen Republican senators led by Senators Ted Cruz (TX) and John Cornyn (TX) visited the southern border in Texas, where they observed and documented the current conditions for the American people as the Biden administration is struggling to handle the surge of unaccompanied migrant children and illegal aliens seeking entry to the U.S.

“These are the Biden cages,” Sen. Cruz captioned the footage posted to his Twitter account. “Thousands of kids, in the midst of a pandemic, crammed in at 1500% capacity.”

“This is just one of the ‘pods’ at Donna. There are SEVEN more, equally full,” he added.

These are the Biden cages. (Faces blurred.) Thousands of kids, in the midst of a pandemic, crammed in at 1500% capacity.

This is just one of the “pods” at Donna. There are SEVEN more, equally full. pic.twitter.com/zyMm5yiIPZ

“We saw cages after cages after cages of little girls, of little boys, lying side by side, touching each other, covered with reflected emergency blankets. There was no 6 foot space, there was no 3 foot space, there wasn’t a 3 inch space between the children lined up, one after the other after the other. And children as young as infants– we saw playpens with infants and toddlers playing,” Senator Cruz told reporters at the border on Friday.

“This is inhumane. It is wrong, and it is the direct consequence of policy decisions by the Biden administration to stop building The Wall, to return to catch and release, and to end the stay in Mexico policy,” Senator Cruz said. Video Below