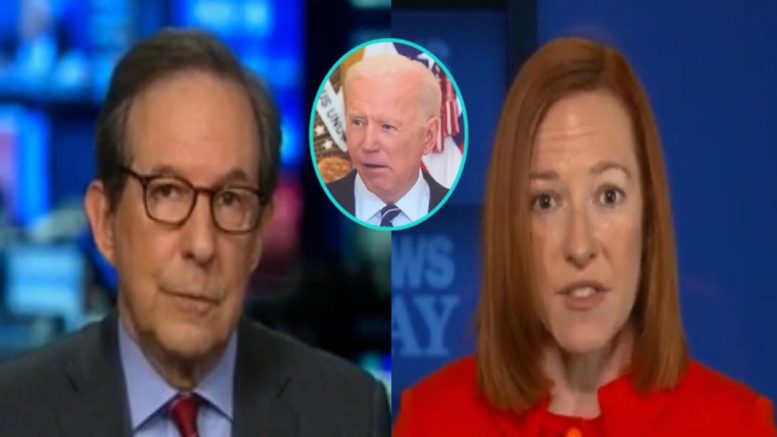 The interview comes just days after eighteen Republican senators, led by Senators Ted Cruz (TX) and John Cornyn (TX), visited the southern border in Texas on Friday to observe and document the current conditions for the American people as the Biden administration is struggling to handle the surge of unaccompanied migrant children and illegal aliens seeking entry to the U.S.

“The president and you have both been in panes over these first two months to talk about how to pledge that you’re going be transparent with the American people,” Chris Wallace told Jen Psaki before playing a video clip of Joe Biden’s remarks this week over whether he would allow media to document border facilities run by Border and Customs Patrol.

Joe Biden could not provide a timeframe over when he would allow the media to go to the border facilities, telling NBC White House correspondent Kristen Welker, “I don’t know”.

“The only way we know how bad conditions are for some 5,000 minors in his Border Patrol facilities is because of these pictures that members of Congress have released on their own. Jen, these kids are living in these conditions now,” Wallace told Psaki.

“They’re not living in these conditions some indeterminate time from now when the president says everything will be fixed, so why not allow reporters and camera crews in on a pool basis based domain safely to show the American people what’s happening in those border patrol facilities right now?” he asked. Continued Below

Wallace interjected, “But, when?”

Psaki claimed, “We want to provide access into the border patrol facility. We are mindful of the fact that we are in the middle of a pandemic. We want to keep these kids safe, keep the staff safe, but we are absolutely committed to transparency and providing access to media to the border patrol facilities, and we are working to get that done as soon as we can.” Continued Below

“But just to clarify, Jen, you allowed a camera crew in to see the HHS facilities, but we are talking about here are the Border Patrol facilities, the detention cells, you know, there is a law that they are not allowed to be there for more than 72 hours, many of them are there for ten days,” Wallace told Psaki.

“At this point, in terms of allowing access to Border Patrol facilities for reporters, you are being less transparent than the Trump administration,” he directly told the White House press secretary.

Psaki deflected and alleged, “Well, first of all, Chris, the Trump administration was turning away kids at the border, sending them back on the treacherous journey, or they were ripping kids from the arms of their parents. We are not doing that. We are committed to allowing cameras into the Border Patrol facilities, absolutely.” Video Below

Biden's Press Secretary Jen Psaki still refuses to say when the press will be given access to border patrol facilitieshttps://t.co/U5cTqWSEs8 pic.twitter.com/z3BzFgEpmm