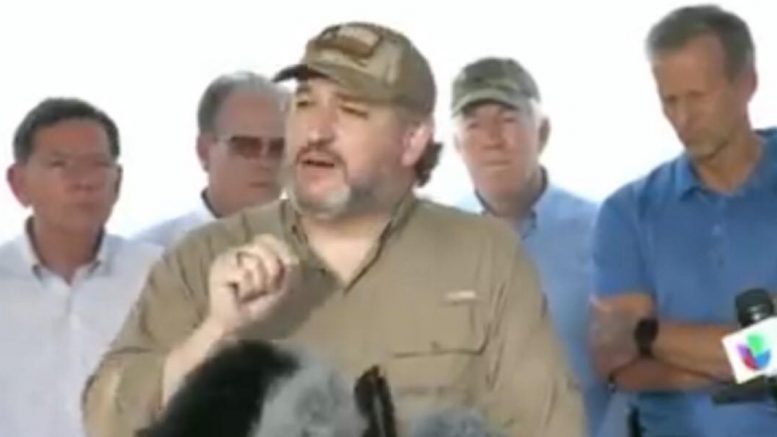 Eighteen Republican senators led by Senators Ted Cruz (TX) and John Cornyn (TX) visited the southern border in Texas on Friday to observe and document the current conditions for the American people as the Biden administration is struggling to handle the surge of unaccompanied migrant children and illegal aliens seeking entry to the U.S., as previously reported by The Freedom Times.

“It is great to back in the Rio Grande Valley. It is terrific that John and I were able to bring 18 Senators down to Texas down to valley to see first hand the crisis that is unfolding here. All of us today witnessed the Biden cages,” Senator Cruz announced, before slamming the Biden administration for their failing immigration policies and lack of transparency.

“What is occurring here on the border is heartbreaking, and it is a tragedy. You know, as we stand by the banks of the Rio Grande, we have an army of TV cameras here. It is striking that not a single one of these cameras is allowed in the Donna facility. We requested that media accompany us in the facility. The Biden administration said ‘no'”, he revealed.

Mr. Cruz said the Donna facility is a “giant tent city”, noting that it is “built with a capacity of 150”, but it had “nearly 4,000 people in it”. Continued Below

“We saw cages after cages after cages of little girls, of little boys, lying side by side, touching each other, covered with reflected emergency blankets. There was no 6 foot space, there was no 3 foot space, there wasn’t a 3 inch space between the children lined up, one after the other after the other. And children as young as infants– we saw playpens with infants and toddlers playing,” Senator Cruz detailed.

“This is inhumane. It is wrong, and it is the direct consequence of policy decisions by the Biden administration to stop building The Wall, to return to catch and release, and to end the stay in Mexico policy,” Senator Cruz said. Video Below

He also announced that the senators will be “releasing a number of those photographs and releasing those videos” from what what they witnessed firsthand “so the American people can see what’s happening here”.

“This needs to stop. It is a crisis. It is tragedy, and it is a man-made crisis. This was avoidable. It was preventable. And regardless of your Party, Republican or Democrat, you should look at what’s going on here and say ‘enough is enough; this must stop'”, Senator Cruz urged.

These are the pictures the Biden administration doesn’t want the American people to see. This is why they won’t allow the press.

This is the CBP facility in Donna, Texas.

This is a humanitarian and a public health crisis. pic.twitter.com/UlibmvAeGN

The CBP facility in Donna, Texas is a tragic superspreader event caused by the Biden admin.

Per CBP, the Donna facility has a 10% positivity rate. Roughly 4000 aliens are cramped together into cages.

Pictured (identities obscured) are kids who tested + for COVID…today. pic.twitter.com/D5JTYWV2Pl

Hollowed-out 2x4s, used to smuggle drugs across the border.#BidenBorderCrisis pic.twitter.com/q065T2IgEo