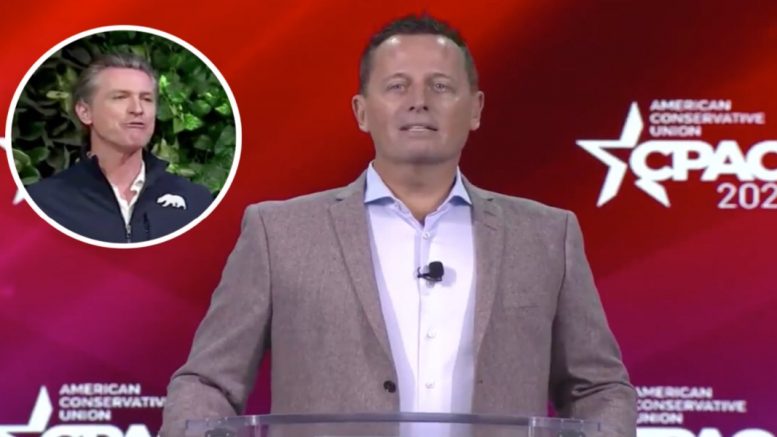 Former Acting Director of National Intelligence Richard Grenell hinted at running against Gavin Newsom (D) for governor of the State of California, during a speech Saturday at the Conservative Political Action Conference (CPAC).

Grenell, in his remarks, criticized Governor Newsom and praised the recall effort that is gaining steam in the Golden State.

“If you want the best case possible for a recall campaign, take a look at my home state of California. California used to be Reagan country, the shining example of business innovation and middle-class success. But now when you think of California, you think of out-of-control wildfires, of rolling blackouts, of schools still closed, of shuttered business, of bans on fracking, and on wealthy people jumping the vaccine line,” Ric Grenell said.

“In my three decades in American politics I have never seen a better case for a recall than there is right now in California,” he expressed.

“And of course, if a public official is still failing to deliver on their promises, and if you can’t limit their term or recall them in time, there’s always one other option: You can run against them yourself,” Grenell declared.

Trump allies such as Fox New host Sean Hannity and Rep. Matt Gaetz (R-Fla.) have urged Grenell to launch a gubernatorial bid if Newsom is recalled, and sources previously told The Hill that the former Trump official is considering it, though he has acknowledged that a Republican running for statewide office in California would face tough odds, The Hill reported. Video Below

Wow, @RichardGrenell just made a hint that he might run for #California Governor at @cpac. Please save my home state, Amb. Grenell. President Reagan was a great CA governor, we need another one.

Woah. Chants of “Run Ric, Run!” Break out through #CPAC2021 hall as @RichardGrenell concludes AM remarks.

What do you all think? #RunRicRun

(Related: Gov. Newsom Commends Trump’s Quick Response To CA’s Needs: “I’d Be Lying To You To Say That He Hasn’t Been”)