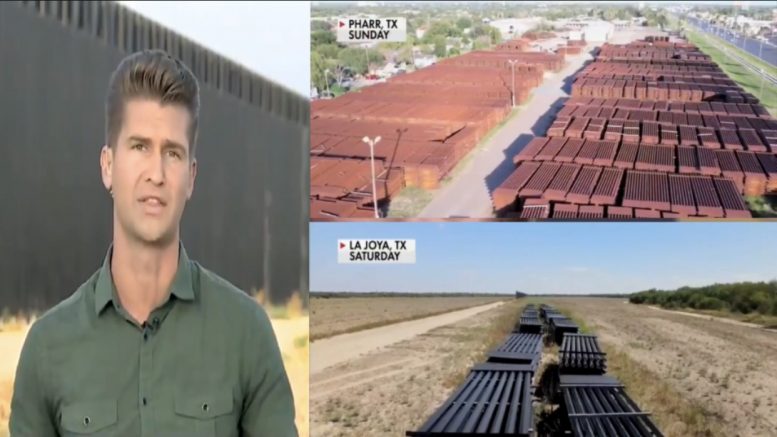 Bill Melugin, national correspondent for Fox News, who is based in L.A., reported Monday over how the Biden administration is blocking border wall construction for the southern border, leaving steel fencing and materials sitting out in the open to rust.

Over 100 miles of wall materials is “just sitting there going to absolute waste,” he explained.

“We’ve known for quite some time now that the Biden administration wasn’t planning to finish this border wall project. But now, we want to show you what it physically looks like to not build the border wall,” Melugin said before showing drone footage of steel materials in Pharr, Texas “sitting out in the open, baking in the sun and rusting, ever since January.”

“I’m told there are about 10,000 of these wall panels just sitting here … each panel worth about $5,000. … Upwards of 50 million just sitting there going to absolute waste. Keep in mind, tax payers have already paid for this. It’s bought and paid for, and nothing is happening with it,” he reported.

Melugin also said a second location in La Joya, Texas contains even more panels going to waste. “Over a hundred million dollars worth of these panels just sitting there. I’m told by a federal source, they bought enough steel for more than 100 miles of wall down here and only about 14 [miles] was built before President Biden halted all construction,” he said.

“Border agents tell us they really need the wall here” in La Joya, Texas Melugin said, noting the agents said they “can’t be everywhere at once”. Video Below

"Another step by the [Biden] administration of taking away an effective measure to address" illegal immigration. pic.twitter.com/kDSimt6bUa

(Related: WATCH: Rep. Boebert Visits The Border With A Cardboard Cutout Of Kamala Harris: “Look At What You’ve Done”)

Ben Carson Drops An Economic Warning: “We Are Creating A Monstrous Problem For Ourselves”