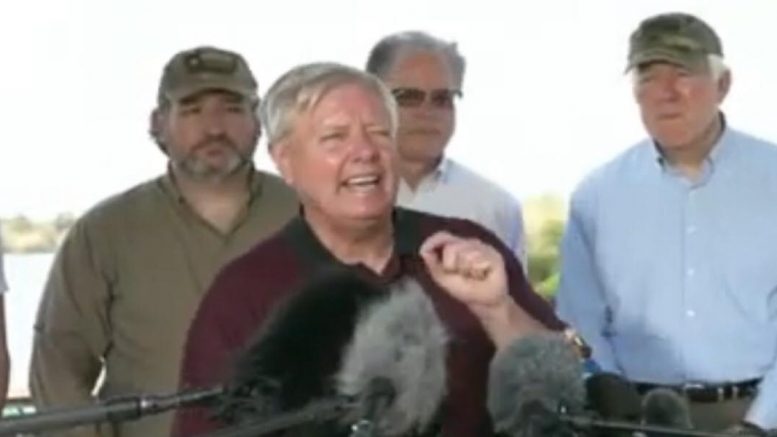 Eighteen Republican senators led by Senators Ted Cruz (TX) and John Cornyn (TX) visited the southern border in Texas on Friday to observe and document the current conditions for the American people as the Biden administration is struggling to handle the surge of unaccompanied migrant children and illegal aliens seeking entry to the U.S.

Senator Lindsey Graham (R-SC) detailed what he learned during the senator’s current visit to the border with his colleagues and slammed the Biden administration for their lack of transparency and failing immigration policies.

“Why are 18 senators here? Because it’s the biggest issue facing the country in many ways right now,” Senator Graham told reporters. “So what I have learned? They knew. If the Trump administration had been told something and they did the opposite and it blew up in their face, everybody would be asking the Trump administration ‘What did you know and when did you know it?'”

Senator Graham told the reporters who were listening, “So I’m going to help you with your reporting. Mr. Hastings who’s a two-star border patrol leader, told us that he briefed transition members of the Biden administration as to what would happen if you do away with the ‘Remain in Mexico’ policy. He told us they briefed the Biden administration what would happen if you change the Title 42 laws to allow unaccompanied children to come here and not be sent back home.”

“Everything they said would happen, happened. So if you don’t do it, I’m gonna do it,” he informed reporters. “I’m gonna find out who he talked to and memorialize that conversation and hold them accountable because they knew. And when they say this Trump’s problem, they’re lying. This is a problem of their own making”.

“What else have I learned? That Joe Biden, the president, made the problem worse yesterday. This was a nightmare press conference. He told everybody ‘Don’t worry. We’ve got crowded facilities, we’re gonna build 5,000 more more beds in Texas at a military base. So how does that play in Central America? They’re gonna expand the number of people they can take. He says when a child has a phone number on their wrist, we’re going to call the family member and unite that family. This is uniting illegal immigration,” Senator Graham explained. Continued Below

“The last thing I learned is that we’re complicit as a nation in human trafficking. What did we learn last night? There’s a trail on our side of the border with markers placed by the federal government to show illegal immigrants where to go,” the South Carolina senator revealed.

“We are transporting people, who pay to get here, the last mile with your taxpayer dollar. It’s costing about eight hundred dollars a day per child,” he said. “If we don’t change the pull factors, go back to the Remain in Mexico policy where they can’t apply for asylum here– send the unaccompanied minor children back to their home country, there will be 250 000 people a month coming. The border patrol said there is no end to this”.

“So Vice President Harris, this is your job to fix,” Senator Graham urged. “I promise you i will work with you, but you cannot possibly understand your job unless you come here”. Video Below

Senator Graham also said that he has “been to Iraq and Afghanistan 56 times”, adding, “Our soldiers serve in incredibly tough situations. What we’re asking the men and women of the border patrol to do is inhumane. They have to deal with things that I don’t know how they make it through the day”.

“I don’t know how their families stay together,” he said of Border Patrol. “So we owe it to them”.

“Finally, the president said, ‘I’m not going to apologize to anybody about my policies’. Mr. President, you need to apologize to those [whose] job it is to secure the country for making their job impossible. And most importantly, you need to change,” Senator Graham demanded.

Mother Reportedly Handcuffed by U.S. Marshals in Uvalde ‘Jumped the School Fence & Ran Inside to Grab her two Children’