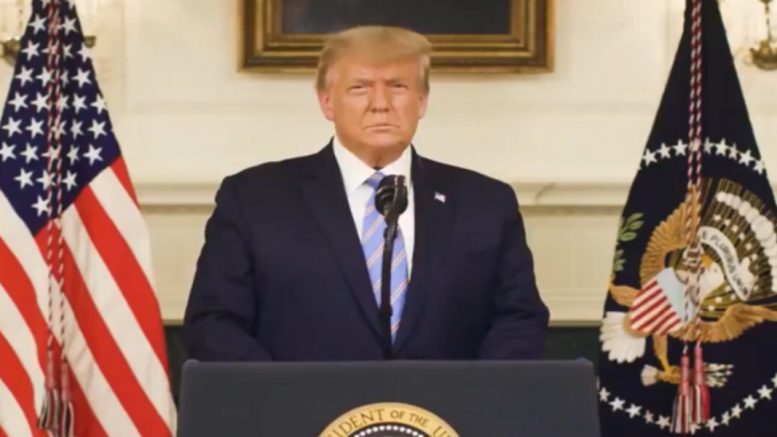 The Commander in Chief on Thursday, released a video message Thursday evening “addressing the heinous attack on the United States Capitol”, and calling for “healing and reconciliation” in the wake of the 2020 November presidential election.

“Like all Americans, I am outraged by the violence, lawlessness, any mayhem. I immediately deployed the national guard and federal law enforcement to secure the building and expel the intruders,” the president said of the Capitol.

“America is and must always be a nation of law and order,” the Commander in Chief stated in his video message. “The demonstrators who infiltrated the Capitol, have defiled the seat of American democracy.”

“To those who engaged in the acts of violence and destruction, you do not represent our country,” he said, strongly condemning lawlessness. “And to those who broke the law, you will pay.”

“We have just been through an intense election and emotions are high, but now tempers must be cooled and calm restored. We must get on with the business of America,” the president continued.

He explained his “campaign rigorously pursued every legal avenue to contest the election results”, noting, “My only goal was to ensure the integrity of the vote. In so doing, I was fighting to defend American democracy. I continue to strongly believe that we must reform our election laws to verify the identity and eligibility of all voters and to ensure faith and confidence in all future elections.” Continued Below

“Now Congress has certified the results. A new administration will be inaugurated on January 20th. My focus now turns to ensuring a smooth, orderly, and seamless transition of power,” he said. “This moment calls for healing and reconciliation.”

“2020 has been a challenging time for our people; a menacing pandemic has upended the lives of our citizens, isolated millions in their homes, damaged our economy, and claimed countless lives. Defeating this pandemic and rebuilding the greatest economy on earth will require all of us working together. It will require a renewed emphasis on the civic values of patriotism, faith, charity, community, and family,” the Commander in Chief explained.

“We must revitalized the sacred bonds of love and loyalty that bind us together as one national family,” said the president. Video Below

The Commander in Chief concluded his message by saying: “To the citizens of our country, serving as your president has been the honor of my lifetime. And to all of my wonderful supporters, I know you are disappointed, but I also want you to know that our incredible journey is only just beginning. Thank you, God bless you, and God bless America”.

Twitter Safety team released a statement on Wednesday after the social media platform removed three of President Donald Trump’s tweets, which triggered his account to be locked for 12 hours.

The decision by Twitter came in wake of the U.S. Capitol being breached by a crowd of apparent Trump supporters while a joint session of Congress was underway to validate the 2020 presidential election results.

President Trump on Wednesday, posted a video along with other tweets encouraging his supporters to tame down their anger and “go home” in order to “have peace.” Twitter, however, refused to allow Trump’s content on their platform, and pulled three of his posts and suspended his account for 12 hours.