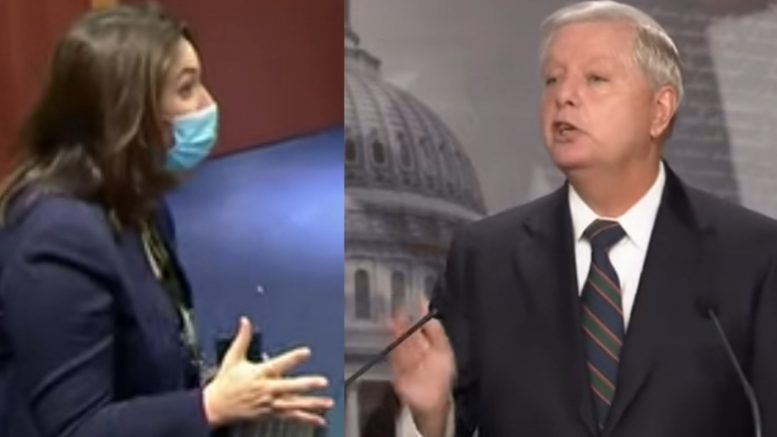 Senator Lindsey Graham turned the tables on the media during his Thursday press conference after being asked if he and other Republicans had a “responsibility to speak out” against President Trump’s rhetoric prior to chaos that erupted at the Capitol Building during Wednesday’s joint session of Congress.

In her question for Sen. Graham, the journalist attempted to blame President Trump and his allies for enabling the unlawfullness that transpired after his early-afternoom rally.

The reporter asked: “After being so close to this President for four years, do you think that you and other Republicans had more of a responsibility to speak out both privately and publicly when he said things that were untrue — when he ginned up his base — do you think that that would have made a difference yesterday?”

Sen. Graham fired back: “I think that the Trump presidency has been poorly covered by people in your businessI think that from the time he took office, there’s been an effort to cover his presidency in a way that I think is not helpful to the country.

He continued: “I have spoken up. There has been an effort to believe everything that Trump did was wrong before it’s proven or not. All I can say is that I have shared my thoughts with the President. I have spoken out when I thought I should.”

Related Article: President Trump Posts A Message After Being Unlocked On Twitter: “Our Incredible Journey Is Only Just Beginning”

“But the one thing that I want you to know — that plenty of Republicans believe — [is] that the Trump presidency was never legitimate in the eyes of the Democratic Party, never accepted by the people in your business, and it’s been a constant drum beat. And I think that’s taken a toll on all of us,” Sen. Graham declared.

Here is the full video of Senator Graham’s press conference:

James Woods: “A Dishonest, Biased Press, Hijacked By The DNC, Is Not Only Unnecessary, But A Danger To A Free Republic”