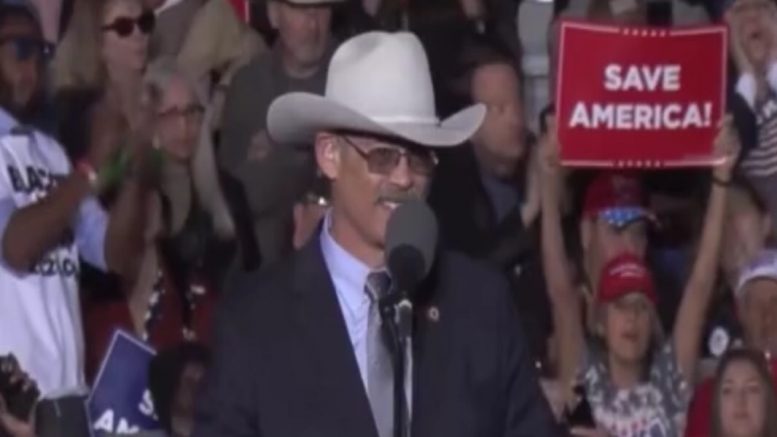 Finchem, who is running for secretary of state of Arizona was endorsed by Trump in September of last year. The 45th President said in a statement, “Mark was willing to say what few others had the courage to say.”

“I did not know that a little over a year ago, the act of standing up for you about a suspicious election that has since been proven to be irredeemably compromised, would ignite a nationwide populous movement to regain control over our government and to trigger my pursuit to be your next secretary of state,” Rep. Finchem said at the rally.

The Arizona election integrity stalwart said that “his focus has been and always will continue to be on making it easy to vote but hard to cheat”, adding, “After all, elections to belong to the people. They don’t belong to the government.”

“I want to say thank you President Trump for the leadership you have shown where so many others failed. No other elected official that I can think of has taken more hits for his country than Mr. Trump. And sir, that’s why the people love you,” the Arizona State representative said. Continued Below

Rep. Finchem also said that if “we strip away all the various ways cheating showed up in the 2020 election, when we consider both the criminality and the incompetence, the margin of error exceeds the margin of victory.”

“Ladies and gentlemen, we know it, and they know it. Donald Trump won,” he firmly stated, before detailing proposed election integrity bills for the 2022 Arizona legislative session.

“From Maricopa County to Pima County, and yes, even all the way down to Yuma, we have a systematic problem. I’m not talking about voter fraud. I’m talking about election fraud. We’re always going to have voters that cheat. But we have systems that are broken. We need to repair those systems … take care of those systems, we need to maintain those systems,” he urged. Continued Below

“You deserve a secretary of state who will put your interest first, who will diligently promote voter list cleanup, watermarks on ballots, a verifiable audit trail, and to refer criminality to the attorney general’s office when it’s found. We must take what we’ve learned in the audit and restore your confidence in your elections, but I’m going to need your help,” Finchem said.

“I look forward to the day that we set aside an irredeemably flawed election. That’s the election of 2020. With all the evidence we have, the Arizona election should be decertified with cause by the legislature, and yes, the unenumerated powers of the 10th Amendment do indeed give the State legislatures around this country, when they have an irredeemably flawed election,” he explained.

“Irredeemably flawed means they cannot determine who the real winner is because the election is so polluted. It is time for us, the Arizona legislature to move those counties, which are irredeemably compromised, into your ‘decertified section’. This is how the people can get justice,” Rep. Finchem clarified. Video Below