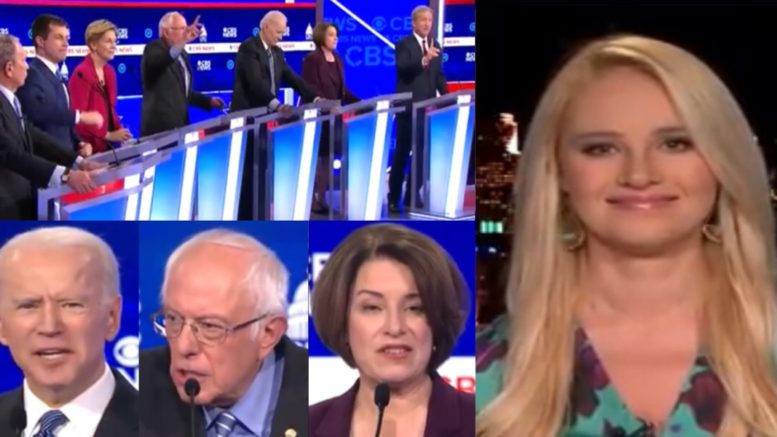 “I’ll tell you what it says about the state of the Democratic Party: it’s pathetic, it’s sad,” Tomi Lahren said after a clip was played of the Democratic candidates arguing at each other during Tuesday night’s debate.

“I actually tweeted last night with that debate stage reminded me of, was a nursing home cafeteria that ran out of jello”, Lahren expressed. “Everyone was very upset, very angry, very old, and pushing a lot of very strange ideas.”

“But then again, that is the bed of the Democrats made for themselves and now, they have to lie in it,” she added.

Lahren noted that Democrats “did this to themselves” as they have been “pushing radical ideas”, adding “they’ve been having people at the helm like Alexandria Ocasio-Cortez, Ilhan Omar, Rashida Talib, and the rest of them.” (Continued Below)

“They’ve been radical for months on end and now, they end up with Bernie Sanders as their frontrunner. And now all of sudden, they’re confused and they think they have to do something about it,” the Fox News contributor continued.

“They did this to themselves. They should have been paying attention. They shouldn’t have been pushing radical notions, because this is what they’re left with,” Lahren added. (Video Below)

This stage looks like a nursing home cafeteria ran out of jello. Good God.

The Democrats went into full meltdown last night. Have they finally realized the radicals have taken over? Debate stage looking like Animal Farm! I’ll discuss on @foxandfriends in 10 mins!

We leave you with a response from actor James Woods, in regards to Tuesday’s Democratic debate:

The moderators of these #DemocratDebates are such mealy-mouthed suck-ass sycophants, it’s beyond embarrassing. No wonder Tom Perez and the rest of the Democrat Party apparatchiks were terrified of having a debate on Fox. Tucker would have shredded these fools like moldy cheese.